Association between MBL2 gene polymorphism and rheumatic fever: a systematic review and meta-analysis

Rheumatic fever (RF) is commonly believed to be a pathological condition resulting from Streptococcus pyogenes, also known as group A streptococcus (1). Recurrences of RF or untreated Streptococcus pyogenes may cause further vascular disease, with approximately 50% to 75% of patients progressing to rheumatic heart disease (RHD) (2), which causes cardiac morbidity and mortality in disadvantaged populations globally (3,4). According to a global, regional, and national survey from 1990 to 2015, more than 33 million patients were living in Streptococcus pyogenes endemic areas (5). Although the mechanism of RF has not been completely clarified, studies believed that RF is an immunity reaction of molecular mimicry between streptococcal antigens, environmental factors such as ultraviolet rays, other human proteins (6) (serum protein electrophoresis showed that albumin decreased, A2 and Y globulin increased, and mucin also increased; immunoglobulin IgM/IgG, complement increased in the acute stage, especially complement C3 and C4 changed on the second day after the clinical symptoms of RF) and genetic factors account for approximately 60% of rheumatoid arthritis (RA) susceptibility (7).

MBL-2, an autosomal gene, is located on chromosome 10q11.2-q21 and consists of four exons (8). rs1800450, rs1800451, and rs5030737 in MBL2 gene contain 3 different allelic variants [A (wild type), B, C, and D, respectively] and the homozygotes are nonfunctional monomers (9), so the MBL2 gene variants B, C, and D are often pooled and collectively known as O. The main function of MBL2 includes Activate complement, promote photoacoustic phagocytosis, regulate inflammation, and promote cell apoptosis (10), so such MBL2 gene has been shown to be associated with a generalized increased risk of infections. MBL2 activates the complement system through the lectin pathway (11) and plays a crucial role in innating immune system (12). Many previous studies have demonstrated that the serum levels of MBL is associated with vulvovaginal candidiasis (13), and pulmonary tuberculosis (12). Besides, Ramasawmy et al. concluded that defective MBL2 alleles contribute to rheumatic etiology (14). However, Marzetti et al. thought that MBL2 is not in the pathogenesis and in the clinical manifestations of RF (15). There is no consensus regarding the association between MBL2 and rheumatism.

To attempt to clarify whether MBL2 gene plays an important role in RF, therefore, we carried out this study to determine whether the expression of MBL2 enhances the risk of RF. We present the following article in accordance with the PRISMA reporting checklist (available at https://jxym.amegroups.com/article/view/10.21037/jxym-21-39/rc) (16).

We searched medical literature and conducted our study by two independent authors for literature regarding the association between MBL2 gene polymorphism and RF. English electronic databases such as PubMed, Embase, Cochrane Library, Web of Science and CNKI were used to search the literature from January 1995 to June 2021. Key words used in PubMed were as follows: (“mannose-binding lectin gene” OR “MBL” OR “MBL2”) AND (“rheumatic heart disease” OR “RHD”) AND (“rheumatic fever” or “RF”). Search strategies for other databases were modified if necessary.

Inclusion criteria: (I) primitive research; (II) one group described subjects were patients with RF; (III) another group described normal subjects (healthy people); (IV) the original data is complete, and the relevant data can be analyzed directly or indirectly; (V) studies reported the proportion of the MBL2 gene type of included patients.

Exclusion criteria: (I) literature reviews, lectures, cases and letters; (II) the sample size of a single group is less than 15; (III) the original data is incomplete and the relevant data in the literature cannot be extracted.

Meta-analysis was performed using the Revman 5.3 software provided by Cochrane Collaboration Organization. We calculated the combined odds ratio (OR) of the patient group and the normal human and the 95% confidence interval (95% CI). Heterogeneity will be assessed by Mantel-Haenszel χ2 test and the I2 statistic. When I2≤50%, pooled outcomes and 95% CIs were calculated using Mantel-Haenszel method with fixed-effect models, or a random-effect model will be performed. P<0.05 is statistically significant (two sides).

Literature search and characteristics of the included studies

The detailed literature search is presented in Figure 1. The initial search included 143 studies, 33 were removed because of duplicate records, and 94 were excluded after a review of titles/abstracts. Finally, 16 studies were potentially appropriate for further analysis. However, 10 articles were excluded after we read the full text. Eventually, 5 retrospective studies (14,17-20) were included in this meta-analysis (Table 1). 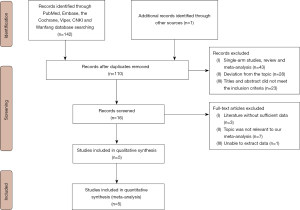 Figure 1 Flowchart of the selection of researches.

Main characteristics of studies included in the meta-analysis

All of the included studies were scaled as a total score more than 5 with a low risk of bias. 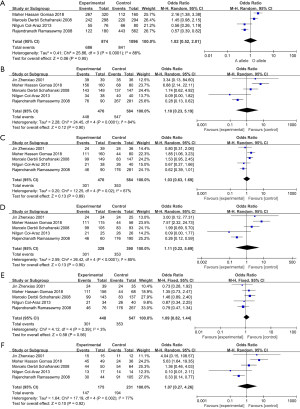 Currently, some studies have reported the association between MBL2 and RF, but none of them reached a reliable conclusion. We investigated those inconsistent results, potentially pooling those inconsistent results. The present meta-analysis included 5 relevant studies involving 1,030 subjects to ensure a sufficient sample. Pooled results demonstrated that there is no association between MBL2 and RF. Most of our pooled results showed significant heterogeneity; unfortunately, it is not appropriate to carry out a subgroup analysis or meta-regression because only five studies were included. Finally, to minimize the probability of type I errors, a random-effects model was utilized for counting the effect size.

A previous study has found three common polymorphic areas in MBL2 (21): Allele B at codon 54 (G54D), allele C at codon 57 (G57E), and allele D at codon 52 (R52C). The mutated allele not only failed to activate the complement pathway, but also damaged the stability of MBL2 gene (22-24). The mutant allele (include B, C, and D) of MBL2 is also named “allele O”. Besides, individuals who were heterozygous for MBL A allele and the dysfunctional allele B, allele C and allele D had a 5 to 20-fold reduction in MBL because of the gene product of MBL mutated allele is clearly dominant negative (12-14). Wild-type MBL2 A is the functional monomers that plays an important role in activating complements and macrophages, and MBL2 is closely related to infection and cardiovascular disease (25), so we guess that gene type may also play a crucial role in protection from the diseases. Previous studies have also pointed that MBL-2 had a potential influence on immune system and clinical indication (12). MBL2 is associated with a wide range of micro-organisms, such as diverse Candida species, Aspergillus fumigatus and Staphylococcus aureus (26). For instance, as complementary host antifungal defense mechanisms may play an important role in vaginal mucosa (27), a normal MBL polymorphism would benefit the host, especially women in reproductive age (28).

However, in our study, we found that there is no association between RF and MBL2. One included study from Schafranski et al. (18) included patients with RF with or without RHD. In their study, they also found that there was no difference in gene expression between RF patients with or without RHD. Also, in the study of Messias et al. (29), they included patients with RF and RHD, but the results showed that there was no difference in the genotype of RF and allele, which was consistent with the study of Schafranski et al. (18). However, in Gomaa’s study (17), they found that B allele would be a protective factor against rheumatic carditis, and B allele could be applicated in the differentiation between RF patients with or without RHD. Paradoxically, the serum levels of MBL2 were associated with the opsonization of complement-related immune complexes (30), so the low serum levels of MBL2 may lead to tissue damage and the deterioration of the prognosis. We speculate that patients with RF with B allele may have faster disease progression.

As a previous study reported that MBL2 could add the susceptibility and severity of some rheumatic diseases (31), low MBL2 serum level and deficient MBL2 gene were associated with a higher incidence of acute cellular rejection (32). On the contrary, study found that MBL2 gene has no impact on antibody mediated rejection, patient death, early graft dysfunction or loss. We guess that there is no significant association between MBL2 gene and RF, but once rheumatic disease progresses to RHD and RA, MBL2 gene can be associated with it.

Although some conclusions were made in this study, there are some limitations should be noticed by clinicians. First, the interaction between ethnicity and MBL2 was not clear, and we included different ethnicity like Chinese, Brazilian, Egyptians and Turks, so further studies are needed to validate the relationship between ethnicity and MBL2. Second, we are unable to perform further subgroup analysis to find out the reason of heterogeneity, so we cannot discuss the potential factors (Race, age, region, gender, smoking, economic level and so on) that may have some impact on our pooled results. Third, previous studies have concluded that the function of a single gene may be influenced due to genetic polymorphisms. Four, the level of serum MBL2 may also have some impact on the prognosis of patients with RF. Due to those limitations, our results are relatively weak.

Our study suggests that there is no association between MBL2 gene and RF. However, serum MBL2 may have an impact on patients with RF and other factors should be considered as well, so further high-quality evidence is needed to verify current conclusion.

In conclusion, we found that there is no association between RF and MBL2. However, although MBL2 alleles do contribute to rheumatic etiology, we speculate that patients with RF with B allele may have faster disease progression. Because only five studies were included and the weak effect of the MBL2 gene, further studies are needed to verify if MBL2 genotypes could be a marker for RF and other rheumatic diseases.

The authors would like to express their deepest gratitude to Nakamori Akina.

Reporting Checklist: The authors have completed the PRISMA reporting checklist. Available at https://jxym.amegroups.com/article/view/10.21037/jxym-21-39/rc

Conflicts of Interest: All authors have completed the ICMJE uniform disclosure form (available at https://jxym.amegroups.com/article/view/10.21037/jxym-21-39/coif). The authors have no conflicts of interest to declare.