Association of seasoning salt consumption with the risk of cardiovascular disease among postmenopausal rural women in Bangladesh: a cross-sectional study

In Bangladesh, the projected mortality from cardiovascular diseases (CVD) among women is higher than the global target of mortality from CVDs (1). This finding coincides with the result of a global study that reported an increasing trend of CVD in women (2), more specifically among postmenopausal women compared to premenopausal women, and men of the same age (3).The previous study reported 17% of postmenopausal women of Bangladesh were at ‘high risk’ (risk ≥20%) and 25% of postmenopausal women were categorized as ‘at risk’ (risk ≥10%) population for CVD using the World Health Organization/International Society of Hypertension (WHO/ISH) risk charts and Framingham Risk Score (4).The most recent study identified 56.7% of the Bangladeshi postmenopausal rural women had a risk of developing CVD within the next 10-year and half of them were classified as ‘high-risk’ populations (5). Another study found 35.5% of postmenopausal women as ‘high risk’ (AIP >0.24) population for CVD in Bangladesh according to the atherogenic index of plasma (AIP) (6).Evidence showed the burden of various CVD risk factors were also higher in postmenopausal women compared to the general population and reported as 45%, 58.1%, 23.8%, 7.5%, 73.2%, 41.9%, 20.8%, 25.7% for smokeless tobacco use, physical inactivity, overweight, generalized obesity, central obesity, hypertension, diabetes, and hypercholesterolemia respectively (4-8).

The current study was part of a cross-sectional study conducted in 2016. Details methods of the study with calculation of sample size were published elaborately elsewhere (4-8). We recruited 265 postmenopausal women aged 40–70 years from an outpatient department of a rural primary health care center of Bangladesh by convenience sampling. A total of 118 participants had the behavior of consuming seasoning salt, and rests were free of this habit. The health center was selected purposively. The subjects were included in the study if they were postmenopausal women and screened out as having no CVD based on the self-reported statement, clinical history, and medical records. The menopausal state was defined as no menstrual bleeding for at least 12 months and have no other clinical condition that causes amenorrhea. The samples were excluded if they presented with an acute illness or showed unwillingness to participate.

We collected data by a semi-structured questionnaire, physical measurement, and biochemical measurement. A face-to-face interview was conducted using the semi-structured questionnaire that adapted from the modified STEP-wise approach to Surveillance (STEPS) questionnaire (version 2.1) of the World Health Organization (WHO). The questionnaire was pre-tested to validate before using it in the current study. According to STEP 1 of the WHO STEPS module, at first, we collected data about sociodemographic and behavioral risk factors of CVD. After that, the physical measurements including blood pressure were recorded following STEP 2 of the WHO STEPS module. In this step, we measured the height, weight, and waist circumference to calculate body mass index (BMI) and central obesity. The blood pressure was measured using a sphygmomanometer (ALPK2 Aneroid Sphygmomanometer, Japan) following standard rules for taking blood pressure measurements. In the final step, the blood sample was collected to measure fasting lipid profiles and blood glucose. To reduce recall bias, the questions were selected carefully, show cards of various risk factors used, and participants were given enough time to respond. The whole procedure of data collection was described elaborately in the previous papers (4-8).

We analyzed the data using the Statistical Package for Social Science version 20.0 for Windows (SPSS, Inc., Chicago, IL, USA). We used descriptive statistics to present the sociodemographic, reproductive, and CVD risk factors profile of the study population. We used a clustered column bar chart to show the estimated CVD risk (%) between the consumers and non-consumers of seasoning salt. The CVD risk and risk factors differ between the consumers and non-consumers of seasoning salt were evaluated using the Mann-Whitney U test as the data was non-parametric. Binary logistic regression was used to assess the association of seasoning salt consumption with the 10-year absolute risk of CVD among the study groups. Here, the dependent variable was the risk of CVD and the independent variable was the behavior of seasoning salt consumption (consumer and non-consumer). The findings were adjusted for physical inactivity and oral contraceptive use.

The study was conducted following the Declaration of Helsinki (as revised in 2013). The ethical approval for the study was obtained from the Ethical Review Committee of Bangladesh University of Health Sciences [identification number: BUHS/ERC/EC/16/024 (1/1)] on January 28, 2016 and informed consent was taken from all the participants. Participation in the study was voluntary. There were no potential risks or side effects of participating in the study. Participants had the complete right to withdraw themselves and their data at any stage of the study. The blood sample was drawn in the laboratory maintaining all aseptic precautions. The researcher bearded the cost of biochemical tests and the reports were delivered to the participants after 3 days.

Socioeconomic and reproductive characteristics of the study participants

A total of 265 postmenopausal women took part in the study and completed the questionnaire and the measurements. The socioeconomic and reproductive characteristics of the study participants by the consumption of seasoning salt are presented in Table 1. The percentages of the consumer of seasoning salt (n=118) and non-consumer of seasoning salt (n=147) among study participants were 44.5% and 55.5% respectively. The mean age of them was 53.5±7.5 years. The highest number of women (46%) were from the age group 50–59 years. Most of the women were homemakers (90.8%) and illiterate (60.8%). The monthly income of the majority of women (70.6%) was at the lower-mid level. The percentage of women who had menopause for 6 years or more was 56.2%. Early menopause was identified for 43% of women, and only 3.8% had early menarche. Overall, the consumption of seasoning salt was higher among the elderly (≥50 years), illiterate, housewives, and lower-middle and low-income groups.

Sociodemographic and reproductive characteristics of the study population, n=265

Distribution of CVD risk factors among the participants

Risk of CVD and its association with seasoning salt consumption 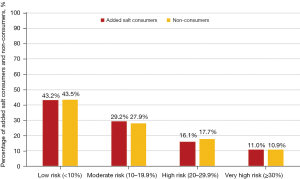 The relationship between excess salt consumption and CVD has been proven in ample studies (16).Studies on postmenopausal women also showed blood pressure among postmenopausal women is salt-sensitive in comparison to premenopausal women (17,18). However, the current study has shown no difference in CVD risk between seasoning salt consumers and non-consumers. The inconsistent finding on salt consumption and its effect on CVD is also reported in other studies (19).The possible reasons postulated for the inconsistent association between salt intake and CVD included differences in methods of measurement, population characteristics, study designs, and outcome measures (19). Besides, population-wise impact of low sodium intake on other dietary factors and J-shaped association between sodium intake and CVD are also considered as the principal reasons for different findings between studies (20). All of these indicated that the issue of salt and CVD is still in a paradox that needs precise and careful evaluation to reach in conclusion.

For the current study, the definition of the outcome measure ‘seasoning salt consumption’ is an important factor that can impact the findings. The term ‘seasoning salt’ is different from the total salt intake of a person. The ‘seasoning salt’ is the amount of salt that is taken with meals to improve the taste of the food; it excludes the amount of salt added with the food at the time of cooking. Therefore, it is quite possible that the distribution of the absolute risk of CVD could be different by the amount of total salt consumption, despite no difference being found by the consumption of seasoning salt. The comparison by the total salt intake was not within the scope of the current study. A further study is recommended for investigating the assumption.

Another possible reason for the non-significant difference in the distribution of CVD risk lies in the characteristics of the study participants. A big portion of the participants was diagnosed with cases of hypertension, diabetes, and dyslipidemia. They usually receive healthcare services from the healthcare center where they were recruited from. The healthcare center provides them salt-reduction education as part of the ongoing health promotion activity and management of chronic diseases. Therefore, it can be speculated that health education has played an important role in the reduction of salt consumption among the samples who have the diseases. The data has also shown a lower proportion of salt consumers among samples who have hypertension, diabetes, and dyslipidemia. On the contrary, those who did not develop any diseases consume more salt than those who did develop any. Thus, it can be argued that the result of the study is greatly influenced by the lower salt consumption behavior of the sample who have a prior chronic disease. Therefore, it can be said that this institute-based data may not reflect the actual attribution of added salt consumption in the absolute risk of CVD due to the educational influence. Another important issue is the study population who is usually considered as a high-risk group due to withdrawal of hormonal protection in favor of CVD. There is no scope to assess the influence of menopausal state whether it masked the impact of added salt consumption on the risk of CVD. Thus, further population-based study is needed to scale the actual impact of seasoning salt consumption among post-menopausal women.

The difference in the use of smokeless tobacco by the consumption of seasoning salt is a significant finding that indicated a behavior that has a great interest in public health. The data of the study showed all the smokeless tobacco users consume seasoning salt with meals. How the consumption of smokeless tobacco is related to the consumption of seasoning salt can be explained in the light of another research. A study on the rat model showed that long-term exposure to nicotine reduces the ion current mediated by the Epithelial Sodium Channel (ENaC), which is a sodium receptor occurring in taste cells (20). As a consequence, the capacity of taste cells to respond to sodium ions reduces (21). The mechanism explains why tobacco consumers tend to use salt more abundantly with their food. Studies on the human population also showed that the taste identification time for salty taste is more in tobacco chewers than non-chewers (21). As a result, the taste perception of the tobacco chewers becomes impaired, and the tobacco chewer uses more salt with food. In Bangladesh, a popular way of taking tobacco is chewing and the use of smokeless tobacco is very common among rural women (22). This explains why smokeless tobacco users consume more salt.

In conclusion, the study did not find any association of seasoning salt consumption with the absolute risk of CVD among postmenopausal women, but it confirmed the relationship with the use of smokeless tobacco. A larger population-based epidemiological study is required to justify the impact of seasoning salt on CVD risk more precisely. The link between smokeless tobacco uses and seasoning salt consumption has wide public health importance and implications and requires further investigation too.

The authors would like to thank the hospital administrator, Mr. Rafael Biswas, for his kind cooperation to conduct the study in his primary health-care center at Gazipur.

Reporting Checklist: The authors have completed the STROBE reporting checklist. Available at https://jxym.amegroups.com/article/view/10.21037/jxym-21-45/rc

Conflicts of Interest: All authors have completed the ICMJE uniform disclosure form (available at https://jxym.amegroups.com/article/view/10.21037/jxym-21-45/coif). The authors have no conflicts of interest to declare.

Ethical Statement: The authors are accountable for all aspects of the work in ensuring that questions related to the accuracy or integrity of any part of the work are appropriately investigated and resolved. The study was conducted following the Declaration of Helsinki (as revised in 2013). The ethical approval for the study was obtained from Ethical Review Committee of Bangladesh University of Health Sciences [identification number: BUHS/ERC/EC/16/024 (1/1)] on January 28, 2016 and informed consent was taken from all the participants.