Pancreatic ascites is a rare condition and may develop following disruption of the pancreatic duct with fistula formation in the abdomen, or rupture of a pseudocyst with tracking of pancreatic juice into the peritoneal cavity. The diagnostic criteria for pancreatic ascites were made based on elevated amylase (>1,000 IU/L) and protein levels (>3 g/dL) (1). Symptoms of pancreatic disease may be absent, especially in alcoholics; as a result, the diagnosis may be confused with ascites due to cirrhosis and portal hypertension. Herein, we report a rare case of a 57-year-old alcoholic male with pancreatic ﬁstula confirmed with endoscopic retrograde cholangiopancreatography (ERCP) who presented with abdominal pain, distended and massive bloody ascites that may be attributed to pancreatic cyst rupture. We present the following case in accordance with the CARE reporting checklist (available at https://dx.doi.org/10.21037/jxym-21-33).

A 57-year-old man was admitted to our emergency department with generalized abdominal pain, distention, and hematemesis. In the previous months, the abdominal pain and distension had gradually worsened. Half a month preceded admission, he had a fever with the highest temperature reaching 102.2 °F with no cough, dyspnea, oliguria and cardiac symptoms. He had a medical history of an episode of pulmonary tuberculosis that was cured with six months of anti-tuberculosis treatment. He was a heavy drinker of alcohol, with a drinking history of 600 mL of country liquor daily for more than thirty years. Physical examination revealed abdominal tense ascites with positive shifting dullness and generalized tenderness with marked rebound tenderness. There was no palpable mass or organomegaly. Examination of the neck, heart, lungs were all normal.

Esophago-gastro-duodenoscopy revealed esophagitis and duodenitis. Contrast enhanced CT scan of the abdomen showed reduction in size of the liver with heterogeneous fatty liver and thrombosis of the main portal (Figure 1A). In addition, there were multiple calcifications in the head of the pancreas (Figure 1B) with main pancreatic ductal expansion (Figure 1C, green arrow), and a cyst in the pancreatic tail (Figure 1C, red arrow), suggestive of chronic pancreatitis. Based on our experience and contrast enhanced CT, the diagnosis of cirrhosis was made. Diuresis, supplementation of albumin, and ascites discharge, whereafter, were performed, but the ascites did not reduce. The increase in serum amylase and lipase led us to suspect pancreatic disease. Hence, Amylase and lipase levels were measured subsequently in peritoneal fluid, which revealed 7,330 and 8,596 U/L, respectively. Ascitic ﬂuid amylase and albumin of our patient were markedly elevated, coinciding with the diagnostic criteria for pancreatic ascites. At the outset, we speculated that the pancreatic ascites was caused by rupture of the pancreatic duct due to the patient’s history of alcohol-related chronic pancreatitis which was considered the main cause of internal pancreatic fistulas (1,2). Pathogenesis of pancreatic duct disruption may due to intraductal high pressure and disruption of branched ductules of pancreas (3). Subsequently, the patient received conservative treatment with fasting, correcting electrolyte disturbance, diuresis, repeated ascites discharge (5 L in 1 week), somatostatin and anti-inflammation. Originally, abdominal pain and distension improved and the color of ascites turned clear. However, eight days after the supportive care, the abdominal cavity was drained hemorrhagic fluid again. At that time, repeat CT scan showed the cyst in the pancreatic tail had shrunk (Figure 1D). Endoscopic retrograde cholangiopancreatography (ERCP) was subsequently undergone that revealed contrast medium leaking through cyst in the pancreatic tail into the peritoneal cavity (Figure 2A), and an endoscopic nasopancreatic drainage (ENPD) tube was placed into the main pancreatic duct. The pancreatic juice from ENPD was clear in which no malignant cells were found. Three days after the administration of ENPD tube, his abdominal pain improved with progressive decline in abdominal girth. After 2 weeks, serum amylase, lipase and ascitic ﬂuid amylase, lipase returned to normal. A third CT scan showed the pancreatic tail cyst disappeared (date not shown). In addition, no leakage of contrast medium into abdominal cavity was found in the second pancreaticography (Figure 2B), and he was discharged from hospital. Following 6 weeks, the ascites disappeared completely and the serum amylase, lipase remained normal, so the ENPD tube was pulled out. 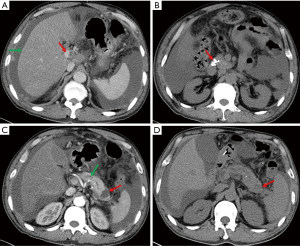 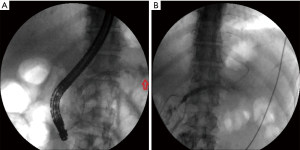 All procedures performed in studies involving human participants were in accordance with the ethical standards of the institutional and/or national research committee(s) and with the Helsinki Declaration (as revised in 2013). Written informed consent was obtained from the patient for publication of this case report and accompanying images. A copy of the written consent is available for review by the editorial office of this journal.

Pancreatic ﬁstulas are classiﬁed as internal ﬁstulas or external ﬁstulas traditionally. External ﬁstulas that the pancreatic duct communicates with the skin are most typically iatrogenic in etiology. Internal ﬁstulas that the pancreatic duct communicates with the peritoneal or pleural cavity or another hollow viscus present in multiple different forms, including pancreatic ascites, pleural effusions, and pseudocysts among others. Internal pancreatic ﬁstulas have been described in approximately 3 to 6 percent of patients with a history of chronic pancreatitis and in 6 to 14 percent of those with pancreatic pseudocysts (4). For our patient, the pancreatic fistula might be caused by the rupture of pancreatic cyst suggested by CT, but the nature of the cyst is still unclear. CT and magnetic resonance imaging (MRI) are often used to differentiate pancreatic cystic neoplasm from pseudocyst. Presence of multiple cysts and internal septations are highly suggestive of tumor (5). Pseudocyst is usually manifested as a thick-walled, rounded, and fluid-filled mass (6). Endoscopic ultrasound/endoscopic ultrasound-guided fine-needle aspiration (EUS/EUS-FNA) is a more effective diagnostic tool to distinguish cystic neoplasms of pancreas from pseudocyst (7). It is more likely a malignant lesion when the cyst contents are highly viscous and the carcinoembryogenic antigen (CEA) value exceeds 192 ng/mL (6). Unfortunately, due to the rupture of the cyst, we were unable to perform a diagnostic puncture. Some authors have suggested that up to 80% of cases of pancreatic ascites can be attributed to leakage of a pancreatic pseudocyst communicating with a ductal disruption (8). Therefore, we speculate that the cyst of pancreatic tail is more likely a pseudocyst, in the context of this patient’s epidemiologic risk factors, including his regular drinking history, chronic pancreatitis and shape of the cyst shown by CT. Symptoms of an internal pancreatic fistulas include vague abdominal pain, nausea, vomiting, altered bowel habits, and abdominal distension. Additionally, patients may have fevers, gastrointestinal bleeding with hematemesis, melena, or hematochezia, as was the case with our patient.

Pseudoaneurysm formation is a rare complication of chronic pancreatitis. Affected arteries are in close proximity to the pancreas with the most commonly involved being the splenic artery followed by the gastroduodenal and pancreaticoduodenal arteries. Pseudoaneurysm in a pseudocyst may be complicated by bleeding into the associated pseudocyst. Blood may remain in the pseudocyst, rupture the pseudocyst, and reach the peritoneal cavity, or reach the gut lumen through the pancreatic duct (hemosuccus pancreaticus) (9). This might contribute to our patient’s bloody ascites and hematemesis. Patients usually present with a sudden onset of abdominal pain associated with unexplained anemia or gastrointestinal bleeding.

Initial management of pancreatic fistula with conservative measures has considerable support in the literature (10). With supportive care, case series have reported fistula closure in approximately 80 percent of external and 50 to 65 percent of internal fistulas over four to six weeks (11). Conservative treatment consists mainly of gastrointestinal rest, nasogastric suction, long-acting somatostatin analogue and total parenteral nutrition (TPN). Repeated paracentesis is an integral part of conservative treatment that encourages healing of the fistula site. For patients who with persistent or enlarging fluid collections on follow-up abdominal imaging after six to eight weeks of supportive care, additional intervention is required, including endoscopic therapy, percutaneous drainage, and surgery. Endoscopic therapy is the preferred approach for management of most pancreatic ﬁstulas. The goal of endoscopic therapy is to promote internal drainage of pancreatic secretions, thereby reducing flow through the fistula tract. This is typically accomplished by placement of a pancreatic stent or ENPD. In case series, endoscopic therapy for pancreatic fistulas has been associated with success rates of 85 to 100 percent (11). For our patient, he was cured by endoscopic treatment with ENPD after the failure of conservative treatment.

Although uncommon, pancreatic ascites can present with massive bloody ascites and acute peritonitis, which is very confused when it mimics spontaneous bacterial peritonitis or ascites due to portal hypertension. Also, pancreatic fistula should be put in the differential diagnosis of ascites especially in middle aged men with a history of alcohol consumption.

We would like to thank Wei Liu for his help in polishing our paper.

Funding: This work was supported by the Medical and Health Guiding Project of Xiamen (3502Z20214ZD1028).

Reporting Checklist: The authors have completed the CARE reporting checklist. Available at https://dx.doi.org/10.21037/jxym-21-33

Conflicts of Interest: All authors have completed the ICMJE uniform disclosure form (available at https://dx.doi.org/10.21037/jxym-21-33). The authors have no conflicts of interest to declare.

Ethical Statement: The authors are accountable for all aspects of the work in ensuring that questions related to the accuracy or integrity of any part of the work are appropriately investigated and resolved. All procedures performed in studies involving human participants were in accordance with the ethical standards of the institutional and/or national research committee(s) and with the Helsinki Declaration (as revised in 2013). Written informed consent was obtained from the patient for publication of this case report and accompanying images. A copy of the written consent is available for review by the editorial office of this journal.