In the era prior to reperfusion therapy only 1% to 3% is reported with the incidence of acute ventricular septal rupture (VSR) following acute coronary syndrome (ACS). The prevalence has since declined to around 0.3% following the advent of thrombolysis and Coronary artery bypass surgery. The mortality rate of post-infarction VSR remains high. In the modern surgical era, post-infarction VSR remains a challenging complication of acute myocardial infarction (AMI) (1).We present the following article in accordance with the CARE reporting checklist (available at http://dx.doi.org/10.21037/jxym-21-7).

A 45-year-old male presented with 2 days history of chest pain burning sensation in the epigastric region pain radiating to jaw, neck and nausea with a past history of type 2 diabetes for the past 3 years. On examination the patient was tachycardic (HR-100/min) with BP measuring 110/70 mmHg, normal cardiac findings and clear chest. The routine investigation was normal. Connective tissue profile, venereal disease research laboratory (VDRL), human immunodeficiency virus (HIV), and complete haemogram were normal. Serum biomarkers are elevated (troponin T, troponin I [0.99 and 0.86 ng/mL) and creatine kinase-MB (38U/L)].  He was treated conservatively as ECG showed ST-segment elevation in leads II, III, and aVF, ST depression in aVL and lead 1 and V1 to V3, no ongoing pain and hemodynamically stable. A routine echocardiogram performed showed evidence of RWMA in the basal inferior and posterior wall with preserved thickness and an LVEF of 45% with no evidence of VSR or clot. The patient received Dual Antiplatelet therapy (clopidogrel 600 mg, aspirin 300 mg, atorvastatin 80 mg) and fibrinolytic therapy (streptokinase) to dissolve the thrombus in the artery and restore flow. Patient was on Novomix and tablet metformin 500 mg. A coronary angiogram performed showed evidence of significant stenosis in right coronary artery (RCA) and left anterior descending artery (LAD) for which he was planned for percutaneous coronary intervention (PCI) for the RCA and LAD. During the course of hospital stay, he developed new-onset chest pain on the fourth day with a systolic murmur of 3/6 grade heard best at the left parasternal border. ECG showed persistent ST-segment elevation in leads II, III, and aVF, ST depression in aVL and ST-segment elevation of greater than 2 mm in right-sided leads V3R and V4R, thus confirming right ventricular myocardial infarction. A review ECHO performed revealed a VSR in the basal septal region forming an aneurysm measuring 3.2 cm × 2.0 cm with a wide mouth measuring 2.2 cm on the LV side of the septum and a 0.8 cm rent on the right ventricular side with a left to right shunt and gradient of 40 mmHg (Figure 1A,B,C). As the patient was very symptomatic with signs of heart failure, worsening hemodynamics, and worsening renal parameters, he was taken for surgical repair after consulting the cardiothoracic team, since it was not amenable for device closure. Complete cardiological assessment using echocardiography and coronary angiography, the patient was approached through a median sternotomy, intra-aortic balloon pump (IABP) was instituted. After cardiopulmonary bypass was established using aortic and bicaval cannulation. The septal rupture was approached through the infarcted area of the myocardium, preferably through the right ventricle with successful patch closure of VSR, coronary artery bypass graft (CABG) LIMA to LAD and SVG to RCA. Postoperative ECG showed Q waves in II, III and aVF reciprocal ST depression and T wave inversion in aVL. Post-surgical echo showed patch on RV side of aneurysm with no residual shunt across the rent and no further increase in the aneurysmal size (Figure 2A,B).  The patient is hemodynamically stable and steadily improving. Due to lack of effective treatment the mortality of AMI complicated with CR is high. The treatment options vary from conservative medical management to percutaneous device closure or surgical repair. Patients with ventricular septal defects (VSDs) had better outcomes when selected for surgical repair than patients treated medically (2).  The main objective of conventional management is to maintain the function of respiration, circulation, and keep the vital signs stable. But in our case the patient was deteriorating hemodynamically which warranted a surgical repair as the outcome of percutaneous device closure was questionable due to the site and pseudoaneurysm. Many clinical trials confirmed that 33% of patients died within the first 24 h after VSR, 70% within the 1st week after VSR, and only 15% can survive 1 month for surgery. In the previous years, surgery should be performed 2–3 months after VSR because at that time the edema of myocardium almost completely subsides, the necrotic tissue around the crevasse is fully fibrotic and the patch can stay in place after suturing (3), so now, an earlier surgery is suggested. In order to restore circulation dynamics, urgent Surgery is required for VSR patients with rapid deterioration along with large rupture. Emergent surgery outcomes are satisfactory for the patient who positively respond to IABP or if rupture is in the apex and the surgical route is via left ventricular. The patients who do not react to IABP well, or whose rupture is in the right ventricular septum then the surgical results will not be ideal; 42.9% is the overall operative mortality, which constitute the highest mortality rate of any cardiac surgery. Mortality rate was much lower for procedures considered elective (13.2% mortality) than emergent (56.0% mortality) than rescue (80.5% mortality) (4). All procedures performed in studies involving human participants were in accordance with the ethical standards of the institutional and/or national research committee(s) and with the Helsinki Declaration (as revised in 2013). Written informed consent was obtained from the patient. 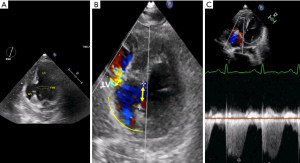 For cardiothoracic vascular surgeons VSR remains one of the most challenging conditions. Post-infarction VSR incidence is declining due to the availability of early reperfusion therapy for acute coronary syndrome. The best line up of surgical repair for VSR is very critical. A longer interim before surgery has been reported to be associated with improved survival. VSR is a dreaded complication of AMI. Although the incidence has come down in this reperfusion era from 1–2% to a mere 0.17–0.31%, still the mortality remains high. Mortality was higher in patients with VSRs at 30 days than in those without this complication. Compared to elective PCI in patients who did not receive thrombolytic therapy, primary PCI has a striking impact on reducing the incidence of VSD after AMI. Risk of this catastrophic complication after AMI, had potentially increased in the advanced age, female gender, anterior infarction, and low BMI patient category. From previous 2 decades despite the advances, the rate of VSR complicating AMI has not changed, and the mortality associated with VSR has remained high and relatively constant (5). In patients with recent myocardial infarction particularly in late presenters, a VSR should be suspected if there are signs of cardiac failure, a new onset holosystolic murmur on the precordium. This can be confirmed by 2D echo and color Doppler. In patients who developed VSD, the infarct artery was more often the left anterior descending and more likely to be totally occluded. Inferior or lateral infarctions are more likely to cause basal defects and anterior infarctions are more likely to cause apical defects at the junction of the septum and the posterior wall. The newly formed communication results in left to right shunting of oxygenated blood from the high-pressure left ventricle (LV) to the lower-pressure right ventricle (RV), regardless of location. Mortality rates are higher, for inferior VSRs compared to for anterior VSRs which can be attributed to a combination of factors such as difficult surgical access, right ventricular dysfunction, increased risk of conduction block and a potentially higher incidence of residual shunts. Mortality of patients in the Society of Thoracic Surgeons database varied notably depending on timing of surgery; 54.1% mortality for the patients who underwent cardiac surgery within 7 days, 18.4% mortality for the patients who underwent repair after 7 days. Consistent with other parameters mortality was highest (>60%) in patients who underwent operation in the first 24 h (6). Based on the pathological features of the cardiac free wall rupture, Becker and van Mantgem proposed the classification into three types (7).

Type I: sudden in onset, slit like tear, with in 24h. Type II: subacute, erosion infarcted myocardium. Type III: late presentation, aneurysm formation and rupture, a process associated with older infarcts. Septal ruptures are further classified as simple or complex. Simple ruptures have a direct connection between the left and right ventricles, occurring at the same level in both chambers, while complex ruptures take a serpiginous course and are more likely to be caused by hemorrhage and irregular tears within the necrotic septum, in our case it was type III VSR (7).

In the modern surgical era, post-infarction VSR remains a challenging problem of AMI. Although the incidence of this dreaded complication has come down in this reperfusion era, it still has high mortality and should not be overlooked particularly in patients presenting late. Surgical repair has to be considered in all cases as definitive management for this complication as only medical management caries very high mortality.

Reporting Checklist: The authors have completed the CARE reporting checklist. Available at http://dx.doi.org/10.21037/jxym-21-7

Conflicts of Interest: All authors have completed the ICMJE uniform disclosure form (available at http://dx.doi.org/10.21037/jxym-21-7). The authors have no conflicts of interest to declare.

Ethical Statement: The authors are accountable for all aspects of the work in ensuring that questions related to the accuracy or integrity of any part of the work are appropriately investigated and resolved. All procedures performed in studies involving human participants were in accordance with the ethical standards of the institutional and/or national research committee(s) and with the Helsinki Declaration (as revised in 2013). Written informed consent was obtained from the patient.