Myocardial infarction (MI) is a severe type of coronary artery disease. With the activation of local inflammation and the stimulation of cytokines, the heart changes at the cellular and extracellular matrix (ECM) level, leading to ventricular remodeling (VR), eventually cause heart failure (1,2).

Beta blocker and angiotensin-converting enzyme inhibitor/angiotensin receptor blocker (ACEI/ARB) have been proved in improving VR and prognosis after MI, but they cannot completely prevent the occurrence of heart failure (3,4). In the last decade, stem cell therapy has become a hot spot in basic and clinical research (1-6). However, there are different conclusions about the effectiveness. Moreover, the potent to arrhythmia partly affect its clinical trials (7-10). It has been suggested that the potential benefits of stem cell therapy after MI may derive from a variety of cytokines secreted by the cells, including hepatocyte growth factor (HGF) and insulin-like growth factor 1 (IGF-1) (11,12). HGF and IGF-1 has been reported on promoting the recovery after MI (13-15). But whether combination of HGF and IGF-1 enhances the effect and how it works is still not fully understood.

In the process of myocardial fibrosis, matrix metalloproteinase (MMPs) play an important role (16). MMPs are a series of zinc ions dependency endogenous enzymes, which degrade the ECM components mainly (17). It has been reported that on the edge of infarcted area, the increasing expression of MMP8/13 had been observed, which indicates it may be related to VR process after MI. But the mechanism stayed unknown (18).

The application of MI SD rat model is an important means to study the scientific problems related to MI, and the conclusions come from which may have a good relevance to human biology. We present the following article in accordance with the ARRIVE reporting checklist (available at http://dx.doi.org/10.21037/jxym-20-95).

Here we try to figure out how combination therapy of HGF and IGF-1 influence the expression of MMP8/13 after MI and what the possible mechanism may be.

Forty-eight male SD rats weighing 300–350 g were fasted all night except for free access to water. Then the rats were anesthetized with pentobarbital (concentration: 1%, 0.4–0.5 mL/100 g) by intraperitoneal injection. Endotracheal intubation was performed under a 14-gauge cannula mounted on a blunt and hollow needle with a 145° angled tip. The rats were mechanically ventilated with room air at a tidal volume of 0.5 mL/100 g body weight and a frequency of 100 breaths/min. The electrocardiogram Lead II was selected for continuous monitoring (BIOPAC MP150). A thoracotomy was performed via the left fourth intercostal space. Then, the pericardium was incised, and the left atrial appendage was elevated to expose the left anterior descending coronary artery. The left anterior descending coronary artery was ligated 2 mm below the left atrial appendage by using a 5/0 nylon suture. Successful occlusion was confirmed electrocardiographically by ST segment elevation. Drainage tubes were used to withdraw air or blood in the cavity while the chest is closed. The rats recovered from anesthesia and were then placed back into their cages for 2 weeks. Intramuscular injection of penicillin was administered post-operatively for prevention of infection.

Two weeks after surgical intervention, the 34 surviving rats were anesthetized and orally intubated as described above. The rats were mechanically ventilated with room air, and a new thoracotomy was performed. The animals were randomized to receive phosphate buffer solution (PBS group, n=8), HGF solution (HGF group, concentration: 100 ng/mL, n=9), IGF-1 solution (IGF-1 group, concentration: 150 ng/mL, n=9) and a mix of HGF and IGF-1 (GFs group, concentration: HGF:100 ng/mL, IGF-1:150 ng/mL, n=8) by injection into the border of infarcted area. Successful injection was confirmed by the formation of a bled covering the infarcted zone. After recovering from anesthesia, the rats were placed back into their cages for 6 weeks. Prevention of postoperative infection was controlled as described above.

After ultrasonic examination, the rats were killed by cervical dislocation and hearts were harvested. The left ventricular myocardium was cut in half through the center of the infarcted area. One half was immediately stored in −80 °C for further processing, and the other half for histopathological examination of hematoxylin and eosin (HE) staining and Masson staining. The infarcted region was visually identified by a mottled and pale discoloration. The border zone was myocardium which extended 1.0–2.0 mm from the infarcted area.

Real-time qRT-PCR was performed according to the manufacturer’s protocol. Total RNA was extracted from the border-zone with TRIzol reagent (Invitrogen, USA), and reversely transcribed to cDNA using M-MLV Reverse Transcriptase (Promega, USA). qRT-PCR was performed to measure the expression levels of candidate genes using a SYBR Green PCR Master mix (Toyobo, Japan). As an internal control, the expression of ACTB mRNA was estimated with the SYBR green system. The specific primer sequences of the selected genes are listed in Table 1.

Samples taken from the border zone were routinely processed. Three sections of each heart were used for HE staining study. We examined the morphology of the myocardial cell, the inflammatory infiltration and the arrangement of cardiac muscle fibers. Each slide was examined under a microscope (Axio Scope A1, Zeiss).

Samples taken from the border zone were routinely processed. Three sections of each heart were used for Masson staining study. The fibrous tissue was stained blue. The area of stained fiber was determined by Image-Pro Plus 6.0 analysis system (Media Cybemetics, USA). Each slide was examined under a microscope (Axio Scope A1, Zeiss) and fibrous area was calculated by scoring 5 randomly-selected microscopic fields.

All quantitative data was described as mean ± standard deviation (SD). If data met normal distribution and homogeneity of variance, one-way ANOVA test was performed in comparisons between groups. Otherwise, we chose Kruskal-Wallis instead. A value of P<0.05 was consider statistically significant. The tests were performed with SPSS 20.0 software.

The study was conducted in accordance with the Declaration of Helsinki (as revised in 2013). All experimental procedures were performed under licensed by the Animal Ethics Committee of the Fifth Affiliated Hospital of Sun Yat-sen University, in compliance with National Research Council guidelines for the care and use of animals (publication No. 85-23 revised 2011). No consent was required from patients since no patients were involved in this study.

Six weeks after the PBS or cytokine solution injection, all surviving rats in each group {PBS group [6/8], HGF group [5/9], IGF-1 group [6/9] and GFs group [6/8]} were included in the statistical analysis. 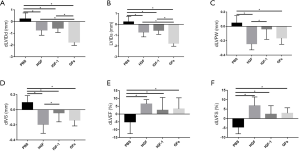 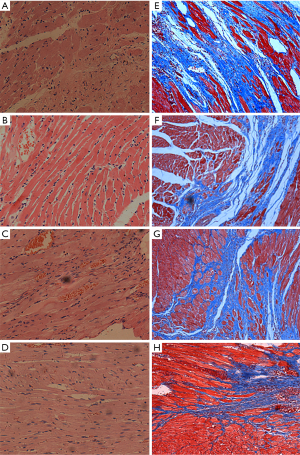 Typical Masson staining results of each group were shown in Figure 2E,F,G,H. It can be seen that the infarcted myocardial tissue was stained light blue because collagen replaced normal myocardial cells, and the remaining normal myocardial tissue was stained red. In PBS group, the infarcted area ventricular wall thinned and left ventricular space expanded. Compared with PBS group, the area of myocardial fibrosis decreased in HGF and IGF-1 group, which was more obvious in GFs group (Figure 2E,F,G,H). 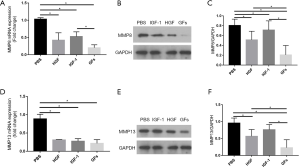 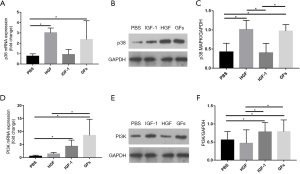 The cardiac protective effects of HGF and IGF-1 have been greatly reported. They can improve cardiac structure and function through promoting angiogenesis and activating cardiac progenitor cells after MI (19-23). But what is the role about HGF and IGF-1 act on the ECM and weather HGF combined with IGF-1 have a synergistic effect are not fully understood. In our experiments, combination therapy of HGF and IGF-1 after MI reduced the fiber deposition on the border zone and improved the cardiac function through suppressing the expression of MMP8/13, and the effect may be more remarkable than any single use to some extent.

Collagen is the main component of ECM in heart, among which, type I/III account for up to 90%. They play an important role in maintaining constitutional and functional integrity of heart. Collagen metabolism will be active after MI. In the infarcted zone, collagen degrade with myocytes necrosis, while on the border zone, collagen fibers deposit abnormally, leading to structure network destroy and making cardiac function decrease (24-26).

Decomposition of collagen is modified by MMPs family, a series of zinc irons which mainly participate in the metabolic activity of ECM. MMP8/13 can degrade type I/III collagen specifically (27). It has been reported that expression of MMP8/13 greatly increased on border zone after MI, prompting that it may have some pathologic significance in the remodeling process (28). In this study, we found that HGF and IGF-1 could both decrease the degree of fibrosis and improve myocardial fiber alignment on the border zone accompanied by the expression of MMP8/13 inhibited.

It is reported that MMPs can be regulated by various signal pathways, including MAPK and PI3K/Akt (29-31). MAPK is a highly conservative group of serine/threonine kinases, which plays an important role in the signal transduction process. As a classical pathway of MAPK, p38 MAPK involves in cellular activities of activation, migration and differentiation of HGF (32,33). PI3K consists of p85 and p110 subunits with the activity of serine/threonine kinase and phosphatidyl inositol kinase. It can cause cascade activation of Akt to participate in the cells of proliferation, differentiation and apoptosis. Studies have shown that IGF-1 can increase the expression of effector molecules, such as Bcl-2, α-actin, IGF and connexin-5 to inhibit cell apoptosis, increase myocardial contractility and modify the collagen synthesis activity of fibroblasts (34). In this study, we found that HGF could increase the expression of p38 MAPK while IGF-1 increased the expression of PI3K/Akt. It indicated that HGF and IGF-1 may play a role in inhibiting VR through different pathways.

Reporting Checklist: The authors have completed the ARRIVE reporting checklist. Available at http://dx.doi.org/10.21037/jxym-20-95.

Conflicts of Interest: All authors have completed the ICMJE uniform disclosure form (available at http://dx.doi.org/10.21037/jxym-20-95). All authors report grants from Science and Technology Planning Project of Guangdong province, grants from The Major Program of Science and Technology Planning Project in Medical and Health of Zhuhai, during the conduct of the study. The authors have no other conflicts of interest to declare.

Ethical Statement: The authors are accountable for all aspects of the work in ensuring that questions related to the accuracy or integrity of any part of the work are appropriately investigated and resolved. The study was conducted in accordance with the Declaration of Helsinki (as revised in 2013). All experimental procedures were performed under licensed by the Animal Ethics Committee of the Fifth Affiliated Hospital of Sun Yat-sen University, in compliance with National Research Council guidelines for the care and use of animals (publication No. 85-23 revised 2011). No consent was required from patients since no patients were involved in this study.