The overall prevalence of chronic kidney disease in China has reached 10.8% by 2012 (1). Hemodialysis is essential for end stage renal disease. Though autogenous arteriovenous fistula (AVF) is recommended as the first choice for patients undergoing hemodialysis because of its fewer complication and longer durability (2). Prosthetic arteriovenous graft (AVG) has the advantage of short maturation time and multiple potential puncture sites, so AVG is still widely used for many patients with inappropriate vessels (3). The amount of falling AVG remains large and the treatment for failing AVG remains important.

Percutaneous endovascular balloon angioplasty has been widely used as an alternative treatment strategy to surgical revision for failing AVG (4). but the patency rate remains poor because of restenosis caused by elastic recoil and intimal hyperplasia (5). To prevent elastic coil, bare-metal stent was introduced in treating failing AVG, but the restenosis rate is still high because of intimal hyperplasia.

The study population consisted of consecutive hemodialysis patients admitted because of failing AVG between March 2014 and December 2016 at our department. All the patients received ultrasonography examination when admitted and digital subtraction angiography (DSA) before endovascular intervention to evaluated the AVG. And were treated with balloon angioplasty or subsequent SG implantation. The data was collected retrospectively. The study was approved by the institutional ethics committee of our hospital and all patients have signed informed consent. The work has been reported in line with the STROCSS criteria.

The inclusion criteria was: (I) patients with arm AVG for hemodialysis aged 18–80 years old; (II) the AVG has achieved ≥1 successful hemodialysis; (III) AVG failed because of insufficient blood flow or thrombosis formation. The study was conducted in accordance with the Declaration of Helsinki (as revised in 2013). The study was approved by the Institutional Ethics Board of China-Japan Friendship Hospital (2013-KY-85) and individual consent for this retrospective analysis was waived.

Most of the patients was admitted for thrill disappear in AVG or increased venous pressure during hemodialysis. Ultrasonography was routinely carried out with a commercially available machine (SSA-660A, Toshiba) using a 10-MHz linear array transducer. Patients were in supine position with arm abducted to about 45°. The blood flow in access circuit, morphological characteristic of the AVG and anastomosis, the inflow artery and outflow vein conduit were examined. All ultrasonography was carried out by the vascular surgeon who carry out the operation.

All procedures were performed using an angiographic machine (Allura Xper FD20, Phillips). For patients with AVG thrombosis, a 2-cm longitudinal incision was made at the lowest part of the ‘U shaped’ AVG. Then the AVG was exposed and controlled with vessel loops. After cutting open AVG, thrombectomy was carried out with Fogarty catheter. Then we carried out the angiography to evaluated the AVG circuit. Balloon angiography with or without SG implantation was carried out if stenosis exist (Figures 1,2). Less than 30% residual stenosis was defined as technical success. One hundred mg aspirin per day was taken for patients after intervention. 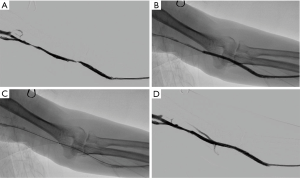 Adverse events of both peri-operative and 30-day were also recorded and compared between the two groups (Table 1). 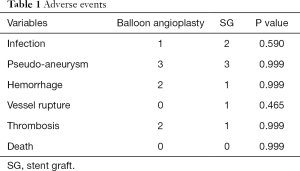 Continuous variables and discrete variables were present as mean ± standard deviation and percentages, respectively. Student t-test was performed to compare means for continuous variables. Fisher’s exact test or Chi-square test was carried out for discrete variables. Kaplan-Meier survival estimates was carried out to analyze the patency rate. Log-rank test was used for the comparison between the two groups. Data analysis was performed with SPSS software, (version 22, SPSS Inc., Chicago, IL, USA). A P value of <0.05 was considered statistically significant.

The study population consisted of 43 consecutive patients (17 men; mean age 62.23±12.45 years) with AVG failure due to thrombosis or increased venous pressure between March 2014 and December 2016 at our hospital. Among these patients, 23 received balloon angioplasty with/without thrombectomy and 20 received subsequent SG implantation. There were no significant differences between the two groups regarding demographic characteristics, clinical features or medical history (Table 2). 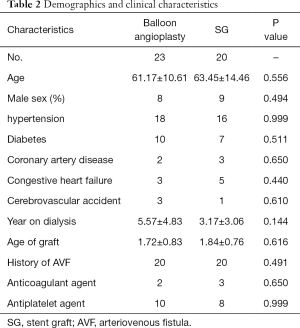 Angiographic characteristics of the lesion 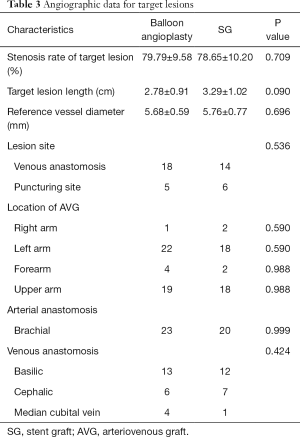 AVG remains an important vascular access for patients in whom native fistulas is unsuitable to be created (10). However, long-term maintenance of AVG remains a problem in clinical practice, mostly due to recurrent stenosis and thrombosis (11). A natural history study of AVG showed that 96% need salvage procedure at 24 months after the construction (12).

The optimal management of AVG failure remains controversial. Balloon angioplasty has been recommended as a first-line treatment for AVG dysfunction, but the reported 6-month primary patency rate is less than 50% (13). The low patency rate, associated complications and costs of repeated balloon angioplasty has promoted clinicians to look for better treatment strategy. Cutting balloon, high-pressure balloon, cryoplasty, brachytherapy and bare-metal stent have been tried in the past decades (14-16), but few has achieved good long-term patency. Drug-coated balloon has recently been reported to be superior to standard angioplasty of stenotic lesion in dysfunctional hemodialysis AVFs (17). AngioJet is reported to be an effective option in the treatment of thrombosed AVF and AVG, but the quality of the current evidence is relatively poor (18). Cellular or gene therapy is under investigation and may have good curative effect (19).

SG provide an endoluminal support to prevent elastic recoil and a polytetrafluoroethylene (PTFE) barrier to prevent intimal hyperplasia. And when implanted in graft/venous anastomosis, turbulence can be changed to laminar flow. So, SG is theoretically superior than PTA or bare-metal stent. It has been used in AVG/venous anastomosis and cephalic-arch stenosis, the treatment area primary patency (TAPP) at 6 months is reported to be 51% vs. 23% with PTA alone in AVG/venous anastomosis and 100% vs. 0% with PTA alone in cephalic-arch stenosis (3,20). In our study, we included AVG failure due to puncture site and graft/venous anastomosis stenosis. The cumulative postintervention primary patency rate at 6 months was 60% for SG and 30.43% for PTA. The 12-month postintervention primary patency rate was 20% for SG and 0% for PTA. And the complications in the two groups were similar. These results showed that SG is superior to PTA in the treatment of AVG failure. But SG placement could also preclude a future endovascular intervention in case of AVG failure. In-stent restenosis may easily occur at both bare ends of the SG (21). So, SG should cover the lesion completely with PTFE barrier. The longitudinal lifespan beyond 12 months may be higher with angioplasty approach first, followed by SG placement later as opposed to primary stent placement.

Vascular access surveillance is important for maintaining patency. A randomized controlled trial showed that access blood flow surveillance with ultrasound and prophylactic intervention can reduce thrombosis and improves AVF patency (22). This may also be applied to AVG. Contrast-enhanced ultrasound may also helpful in routine surveillance (23). In the present study population, most patients admitted because of thrombosis. Only two patients in SG group underwent routine ultrasonic surveillance and was admitted because of increased venous pressure.

Pharmacological treatment is essential during or after the establishment of arteriovenous access. Whether anticoagulation or antiplatelet treatment is better is still controversial. Nee et al. think that aspirin alone is the most cost-effective strategy for preventing AVG failure (24). A systematic review and meta-analysis showed that anticoagulation during arteriovenous access establishment may improve the patency rate of AVF instead of AVG (25). In our study series, patients routinely received 100 mg aspirin after PTA or SG implantation. More randomized controlled trials need to be carried out to evaluate the impact of anticoagulation or antiplatelet therapy, especially for novel oral anticoagulant agents (26,27).

In conclusion, SG is superior to solely PTA regarding 6- and 12-month postintervention patency rate in treating AVG failure. Whether routine surveillance and pharmacological treatment for AVG should be carried out need further investigation.

Reporting Checklist: The authors have completed the STROBE reporting checklist. Available at http://dx.doi.org/10.21037/jxym-21-9

Conflicts of Interest: All authors have completed the ICMJE uniform disclosure form (available at http://dx.doi.org/10.21037/jxym-21-9). The authors have no conflicts of interest to declare.

Ethical Statement: The authors are accountable for all aspects of the work in ensuring that questions related to the accuracy or integrity of any part of the work are appropriately investigated and resolved. The study was conducted in accordance with the Declaration of Helsinki (as revised in 2013). The study was approved by institutional ethics board of China-Japan Friendship Hospital (2013-KY-85) and individual consent for this retrospective analysis was waived.