Acute myocardial infarction (AMI) has developed one of the most common cause of death all over the world. Approximately three million people are suffering from this disease. The leading approaches of AMI is reperfusion therapy, including percutaneous coronary intervention (PCI) and thrombolytic therapy, presently. Despite the improvements in reperfusion strategies, we are facing some challenges, such as ischemia and reperfusion injury (IRI). Consequently, identify risk factors early and timely intervention measures are the pressing demands before reperfusion therapy.

IRI is a severe state and the subsequent injury induced by revascularization therapy. IRI have been widely concerned by the medical community. The role of inflammatory response and atherosclerosis in AMI are well understood. Recently, emerging inflammatory markers, platelet-to-lymphocyte ratio (PLR) and neutrophil-to-lymphocyte ratio (NLR), as well as dyslipidemia, HLR have been shown the closely association with AMI. What we want to achieve is to explore the potential connection between A1BR and IRI in AMI patients, and if A1BR could be better application in clinical practice.

We present the following article in accordance with the STROBE reporting checklist (available at http://dx.doi.org/10.21037/jxym-20-115).

We analysed retrospectively a lot of consecutive patients presenting with AMI, who were admitted to the Department of Cardiology, the Affiliated Hospital of Qingdao University between 2018 and 2020 from Medical data scientific research platform. All of them definitely diagnosed as AMI, according to the fourth global definition of myocardial infarction (1) and whole participants underwent urgent coronary angiography (CAG) and with effective treatment at the same time within 1h after diagnosis. Basic information was recorded during the patient’s hospitalization. All patients were excluded those had AMI or coronary revascularization previously, hematological disease, malignancy, renal or hepatic insufficiency, recent infection or other cardiac diseases. Ultimately, we enrolled 566 participants in this study. The study was conducted in accordance with the Declaration of Helsinki (as revised in 2013). The study was approved by Ethics Committee of the Affiliated Hospital of Qingdao University (No. QYFY WZLL 25808) and informed consent was taken from all individual participants.

The participants were divided into 2 main groups according to the occurrence of IRI events. The severity of CAD was based on the Gensini score (GS) (2) namely mild stenosis (GS 1–60), and severe stenosis (GS >60).

The baseline characteristics on age, sex, height, weight and in terms of smoking, hypertension, and diabetes mellitus (DM) and preoperative medication history was collected by means of a questionnaire at stool collection. BMI was calculated by weight (kg)/height squared (m2). IRI events refers to the occurrence of complex ventricular arrhythmias (VAs) [sustained ventricular tachycardia (sVT) and ventricular fibrillation (VF)], severe conduction block, slow rhythm rate, hypotension, and death during the patient’s hospitalization. Patients with previous or pre-operation have similar event were excluded.

The laboratory variables were drawn at admission before starting the patients on any medication, including of blood routine examination, biochemical criterion, hepatic and renal function, the three myocardial infarction, blood lipid analysis, and so on, which all adopt uniform standard and were performed in the hospital’s central laboratory. The A1BR, monocyte-to-HDL-C ratio (MHR), NLR, HLR was respectively obtained the ratio of the two.

All of subjects of the study were treated with aspirin (300 mg), ticagrelor (180 mg), atorvastatin (20 mg) and other symptomatic treatment according to 2019 Chinese Society of Cardiology (CSC) guidelines for the diagnosis and management of patients with ST-segment elevation myocardial infarction (3). Then, all of them advised to have a CAG examination via standard Judkins technique and PCI was performed according to the criminal’s vascular condition by two professional interventional cardiologists. The evaluation of the severity of CAD according to the GS by two interventional cardiologists.

Basic statistical were analysed by using SPSS 25.0 software. The continuous variables were expressed as mean ± standard deviation, and categorical values were tested as numbers and percentages. Numeric variables were tested with a t-test or Mann-Whitney U test and for categorical variables chi-square was used. The predictors of the IRI events were analysed with univariate and multivariate regression analyses. Receiver-operating characteristic (ROC) curve analyses were used to compare the performance power of the A1BR/NLR/PLR. Two-sided P values <0.05 were considered significant. 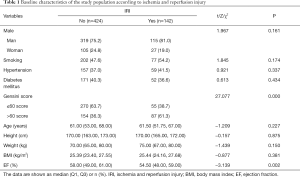 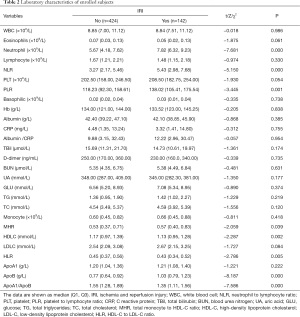 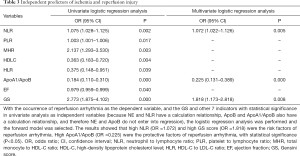 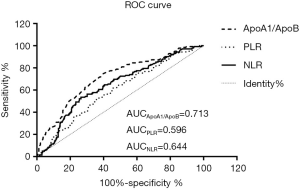 There is no deny that atherosclerosis is caused by the accumulation of lipids and inflammatory cells in the arterial walls and play an essential role in the occurrence of AMI. Previous studies have shown that the association between as mentioned above, such as the MHR, PLR, NLR and so on (4-7). However the levels of HDL and ApoA1 (a principal protein component of HDL) have closely connection with lower CAD risk, especially MI risk (8). This study demonstrated that A1BR levers are lower in patients with IRI events after PCI compared to patients without IRI events. Moreover the A1BR levers also have tight association with GS. This study may become a crucial influence in the prevention and treatment of cardiovascular disease.

Inflammation has significant effects in the progression and destabilization of atherosclerosis and cardiovascular diseases. Ghattas et al. reported that Monocytes have three related effects in atherosclerosis process. (I) Participate in the initiation and formation of atherosclerotic plaques. (II) Cause atherosclerotic plaque rupture and acute thrombosis during the acute inflammatory phase. (III) Promote myofibroblast accumulation, angiogenesis, and myocardial healing and remodeling during healing (9). Moreover, HDL-C has been identified that have anti-inflammatory, anti-oxidant, and anti-thrombotic effects, reducing inflammation by restraining monocyte activities and differentiation (10). Recently, many studies demonstrated that a new marker called MHR in cardiovascular diseases is a depended predictive index (5,10,11). In addition to the above, studies have shown that increased platelet count, decreased lymphocyte count, and increased neutrophil count are independent predictors of cardiovascular events, such as AMI, in-hospital major adverse cardiovascular events (MACEs), IRI and the severity of coronary heart disease (CHD) (6). Also, PLR and NLR have better sensitivity and specificity for predicting cardiovascular events (12-14). In current study, we indicated the effect of PLR and NLR as an independent risk predictor of IRI and in STEMI patients, indicating that PLR and NLR could be used predict possibility of IRI events so as to take timely intervention measures to avoid it.

HDL-C has the effect of anti-atherogenic lipoprotein, which acts to reverse cholesterol transport (RCT), which move cholesterol from the tissues of the body to the liver for catabolism, so as to prevent the accumulation of cholesterol in the arterial wall. ApoA1 is a main apolipoprotein (Apo) of HDL-C, as with HDL-C, also has the effect of inhibiting the formation of atherosclerotic plaques (15). However, the consensus is that LDL-C is a major risk factor for atherosclerosis, which acts an integral part of atherosclerotic plaques. Therefore, ApoB is also a predictor of cardiovascular disease as which a main Apo of LDL-C (16). In our study, we talked about the association between A1BR with IRI and the severity of coronary artery disease. We found that A1BR is closely related to the IRI events and the severity of coronary artery disease compared to other indicators. A1BR may be deemed to be a sensitive predictor for the onset risks of cardiovascular. Zhu et al. reported that the A1BR can indirectly suggest the association anti-AS factors with pro-AS factors in plasma. The study also indicated that A1BR was negatively associated with the number of diseased coronary artery and it also was a protective factor (15). Previous studies showed that the A1BR have stronger association with the risk of AMI. Although LDL-C plays an important role in atherogenic risk because of it is the most important component of atherogenic particles. ApoB could be better reckons the total atherogenic particle number in comparison with LDL-C. Just like the key role that ApoA1 plays in lipid metabolism and composed key molecular player in the pathogenesis of cardiometabolic diseases, such as atherosclerosis. So A1BR has strongly association with the risk of AMI as the A1BR comparing with other indicators (17-20). In a prospective study performed by Walldius et al. coronary risk is determined by both ApoA1 and ApoB, ApoA1 is negatively correlated with risk and ApoB is positively correlated risk. The A1BR is significantly better at identifying coronary risk than any of the cholesterol ratios and not affected by other factors. So, we have sufficient reason to support that the use of A1BR as the foremost single integrative index of the lipoprotein-related risk of coronary disease (20).

The significance of A1BR has been proved by current that it has a strongly association with IRI events and the severity of coronary artery, manifesting that A1BR is also a better way to evaluate the high-risk of AMI and the severity of CAD. Furthermore, for most of the risk factors, on account of its advantages such as inexpensive and simple that we can obtain it easily in clinical practice, A1BR could be found as a marker for identifying participants in danger with AMI and may benefit to avoid adverse events.

Our study had some limitations. Firstly, it was a single center retrospective study and the number of patients was limited. Secondly, there was no strict control of the timeliness of indicators, which might interfere with the results.

Reporting Checklist: The authors have completed the STROBE reporting checklist. Available at http://dx.doi.org/10.21037/jxym-20-115

Conflicts of Interest: All authors have completed the ICMJE uniform disclosure form (available at http://dx.doi.org/10.21037/jxym-20-115). The authors have no conflicts of interest to declare.

Ethical Statement: The authors are accountable for all aspects of the work in ensuring that questions related to the accuracy or integrity of any part of the work are appropriately investigated and resolved. The study was conducted in accordance with the Declaration of Helsinki (as revised in 2013). The research protocol was approved by the Ethics Committee of the Affiliated Hospital of Qingdao University (Identification number: QYFY WZLL 25808) on 17th January 2020. The purpose of the study, the respondents’ rights, and data safety issues were explained to the participants. All subjects gave their verbal and written informed consent for inclusion before participating in the study.