Valvular heart disease (VHD) is a significant and growing health concern worldwide. VHD is a major cause of cardiovascular morbidity and mortality in Sub-Saharan Africa (SSA). Historically, rheumatic heart disease (RHD) has been the dominant form of VHD in Sub-Saharan Africa. Meanwhile in the developed countries, calcific aortic valve disease is the most common valvular heart disease, occurring in the elderly population (1-4). This is because conditions that favor RHD continue to prevail in SSA and other developing countries.

Although RHD is the dominant form of VHD in SSA, other forms of VHD are emerging in SSA because of the aging of the population and increasing life expectancy. This indicates that the epidemiology of valvular heart disease may also be changing as reported in some low and middle income countries (5-7).

We aimed to describe the epidemiology of left sided VHD in the South West region of Cameroon. We present the following article/case in accordance with the MDAR reporting checklist (available at http://dx.doi.org/10.21037/jxym-20-46).

This was a retrospective review of echocardiographic reports for studies performed between July 2016 and December 2018.

This study was carried out in the Buea Regional Hospital, Buea, South West region of Cameroon. This is a tertiary level Hospital and serves as one of the two main referral centers in the region. The Hospital also serves as one of the teaching hospitals of the University of Buea. Buea is the capital of the South West region of Cameroon, a semi-urban setting on the slopes of Mount Cameroon.

The study included all patients who performed echocardiography. Only the first-time Echo of each patient was included in the study to avoid repetition bias. All echocardiographies were transthoracic. The following were excluded from the study: trivial, functional or unspecified mechanisms of mitral regurgitation (MR), trivial to mild aortic regurgitation (AR) due to sclerotic aortic valve.

The diagnosis of RHD was based on the World Heart Federation (WHF) criteria for echocardiographic diagnosis of RHD. Briefly, RHD was defined by the presence of any evidence of mitral or aortic regurgitation seen in two planes associated with at least two of the following morphologic abnormalities of the regurgitating valve: restricted leaflet motility, focal or generalized valvular thickening, and abnormal sub-valvular thickening (8).

Degenerative valve disease was defined as degenerative valve changes with impaired valve function, which required sclerosis/calcification of the mitral and/or aortic valvular apparatus with resultant mild to severe valve incompetence or stenosis and in the absence of rheumatic features (9).

Primary mitral valve prolapse (MVP), for which the standard echocardiographic definitions of classic and non-classic MVP were utilized (10,11).

Data were summarized by the type of valves involved, pathology (i.e., stenosis vs. regurgitation), and severity described as mild, moderate, and severe according to American College of Cardiology/American Heart Association (ACC/AHA) guidelines (12). We have presented discrete variables as frequencies and percentages, and continuous variables as means and standard deviation. We have compared proportions using the Chi-squared test and means using the Student t-test. A P value <0.05 was considered statistically significant for observed differences of associations.

The study was conducted in accordance with the Declaration of Helsinki (as revised in 2013). The study was approved by the administrative authorities of the hospital acting as the local ethics committee. No consent was required from patients since it was a retrospective review of records.

Of the 1,397 echocardiographic studies performed during the study period, 96 were included in this analysis. The prevalence of left sided valvular heart disease was 6.9%. There were 63(65.3%) females. The mean age was 54.7±21.2 years (range: 1–92). There was no significant age difference between males and females (53.5 vs. 55.4; P=0.69). The mitral valve was the most commonly affected valve in 54 patients (55.7%). The distributions of valvular lesions are shown in Table 1. The most common valvular lesion was pure mitral regurgitation (25.5%) followed by pure aortic regurgitation (23.5%). Degenerative valve disease, rheumatic heart disease, mitral valve prolapse and infective endocarditis accounted for 46.9%, 43.8%, 8.3% and 1% of primary left sided VHD respectively (Figure 1). Patients with degenerative VHD were older than those with RHD (mean age of 67.2 vs. 43.7 years respectively). Patients with rheumatic heart disease were significantly younger compared to patients with other forms of VHD (43 vs. 63.8 years, P<0.001). The majority of the patients (71.9%) had severe lesions and were an indication for valve surgery. 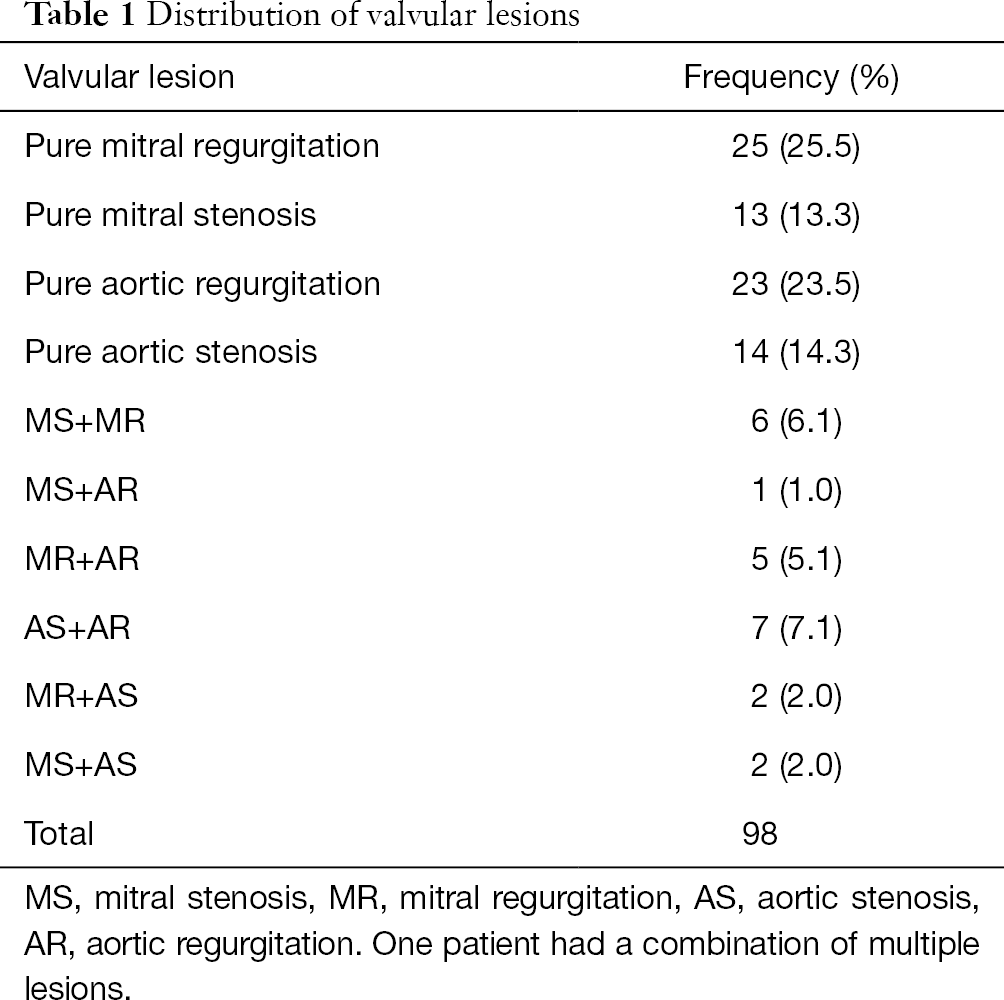 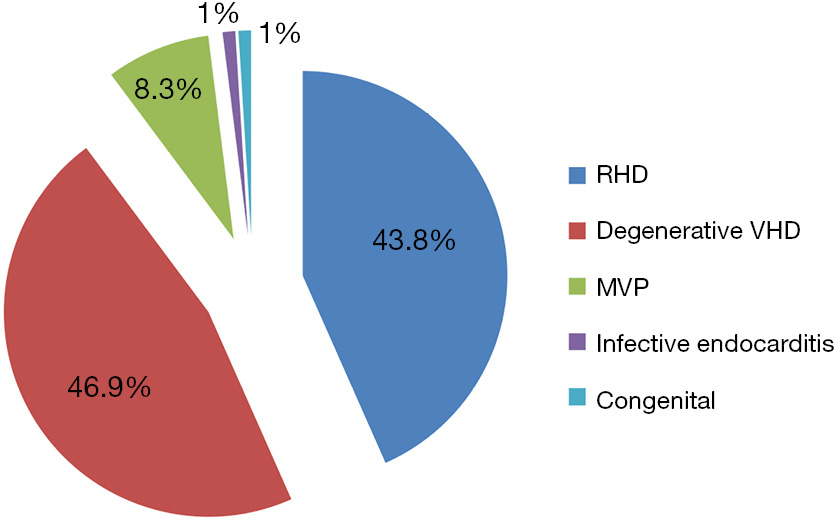 The present study is the first contemporary epidemiological report of VHD in the South West region of Cameroon. We found that the prevalence of left-sided VHD among individuals undergoing echocardiography at the Buea Regional Hospital in the South West region of Cameroon is around 7%. The burden of VHD in this setting is equally shared between RHD and degenerative VHD, both of them representing 90.7% of the causes. Patients with degenerative VHD were older (mean age 67.2 years) than those with RHD (mean age 43.7 years). Monovalvular lesions represented more than 75% of all lesions, and these are mostly mitral regurgitation or aortic regurgitation. Of note, we focused on left-sided VHD as a previous study in the same setting showed that non-functional tricuspid or pulmonary VHD were rare (13).

This overall epidemiological picture of VHD in this population in Cameroon presents some differences from what has been reported in few other studies in Africa. For instance, a study in Togo reported a prevalence of VHD of 4.45% in patients followed-up at a cardiac center in Lomé (14). However, this prevalence which is lower than our finding might have been similar if their study also focused on patients with primary left sided valvular heart disease. Alike what we found, monovalvular lesions were present in 77% of their study population (14). Mitral regurgitation and aortic regurgitation were also the most prevalent lesions, representing 50.8% and 30.7% of cases respectively (14). In the VALVAFRIC study, a multicentre hospital-based retrospective registry of patients with RHD hospitalized in African cardiology departments from 2004 to 2008, monovalvular mitral regurgitation and aortic regurgitation were present in 52.7% and 22.3% of patients, respectively (15). In those two studies, monovalvular mitral regurgitation was twice more prevalent than in our population (25.5% of cases). There are a few possible explanations for this difference. In the Lomé study in which all causes of VHD were included, it is possible that mitral regurgitation as an anatomical lesion was overestimated by the inclusion of functional regurgitation. In the VALVAFRIC study, the focus on RHD might explain the higher prevalence of mitral regurgitation compared to our study in which degenerative VHD was quite frequent, as RHD seems to be a more frequent cause of mitral regurgitation compared to degenerative disease (16).

In terms of etiologies, we found that degenerative VHD (46.9%) and RHD (43.8%) were almost equally the two prominent causes of left-sided VHD in our population. Similar results were found in Uganda: among 3,582 patients, who underwent an echocardiography at the Uganda Heart Institute, 53.0% had RHD and 41.8% had degenerative VHD (5). In the Heart of Soweto Study in South Africa, RHD was more predominant, affecting 72% of patients with de novo presentation of VHD, as compared to 21% of patients who had a degenerative cause (6). The major reason for this higher prevalence of RHD in the Heart of Soweto Study is the lower age of its population (median age of 43 years) compared to our study population which has a mean age of 54.7 years. In fact, RHD is the more prevalent cause of VHD in young patients while degenerative disease mostly affects older individuals. This is clearly depicted in our study by a mean age of 67.2 and 43.7 years in patients with degenerative VHD and RHD, respectively. Another cause of VHD, though less prevalent in our study, is mitral valve prolapse. It is found in 8.3% of patients, a prevalence which is higher than the 1.0% and 1.4% reported in the Heart of Soweto Study and the above mentioned study at the Uganda Heart Institute (5,6). In a large hospital-based study in China, RHD was found to be the most common cause of VHD, representing 37% of cases (17). This is because China like most sub-Saharan countries is endemic for RHD (18). Some differences in the spectrum of VHD in this study in China as compared to those in Africa include much higher prevalence rates of congenital heart disease (13.9%) and ischemic-related valvular lesions (12.7%) and a lower prevalence for degenerative VHD (11.5%) (17). On the other hand, contemporary reports suggest that ischemic heart disease is less frequent in many sub-Saharan African countries compared to the rest of the world (1), although unavailability and unaffordability of diagnostic equipments might contribute to the under reporting of ischemic heart disease (19).

The vast majority of patients (71.9%) in this study had severe valvular lesions. Previous studies in SSA have shown that patients with VHD present with severe valvular lesions indicating late diagnosis (13,15,20). Severe lesions are usually an indications for valve replacement or invasive interventions. But cardiac surgical centers are limited in SSA and usually not affordable (21).

The findings from this study highlight the urgent need to scale up the access to cardiac surgery (22). VHD and especially RHD are the third cause of heart failure in adults in Africa, found in about 15% of cases (1). This prevalence in adulthood is even reduced by the high mortality rate in affected children (23). Furthermore effective preventive strategies should be implemented to prevent RHD, including appropriate treatment of group A Streptococcal throat infection, cost-effective screening and secondary prophylaxis for patients with acute rheumatic fever (24,25).

This study is mainly limited by the retrospective collection of data which is associated with reduced data quality and completeness. Furthermore, the population from this hospital-based single center study is not representative of the general population of Cameroon. A multicenter study will remove selection bias and improve generalizability of study findings.

VHD is common in the South West region of Cameroon. Degenerative VHD and RHD are the two major causes of VHD in this region. There is a need to urgently scale up access to cardiac surgery in the country and to conduct large community-based studies that will better characterize the growing burden of VHD in our population.

Reporting Checklist: The authors have completed the MDAR reporting checklist. Available at http://dx.doi.org/10.21037/jxym-20-46

Conflicts of Interest: All authors have completed the ICMJE uniform disclosure form (available at http://dx.doi.org/10.21037/jxym-20-46). The authors have no conflicts of interest to declare.

Ethical Statement: The authors are accountable for all aspects of the work in ensuring that questions related to the accuracy or integrity of any part of the work are appropriately investigated and resolved. The study was conducted in accordance with the Declaration of Helsinki (as revised in 2013). This work was approved by the administrative authorities of the hospital acting as the local ethics committee. No consent was required from patients since it was a retrospective review of records.