The Grb-associated binder (Gab) family of proteins transduce cellular signals between receptors and intracellular downstream effectors, providing a platform for protein-protein interactions. Gab1, a key member of the Gab family (Gab1, Gab2, ad Gab3), has been shown to mediate cell signaling through tyrosine phosphatase SHP2 or phosphatidylinositol-3 (PI3K) kinase in response to a variety of the extracellular stimuli. The association of Gab1 with SHP2 and the p85 subunit of PI3K is essential for the activation of the Erk/MAPK, PI3K/Akt, and JAK/STAT pathways with diversified biological functions (1). Gab1 is also critical in other physiological activities. Conditional Gab1 knockout in mice showed impaired signal transduction with different system dysfunctions. For example, liver-specific Gab1 knockout mice showed defective liver regeneration (2), and cardiomyocyte-specific Gab1 knockout mice displayed an increase in infarct size and a decrease in cardiac function after ischemia/reperfusion injury (3). Most importantly, very recent discoveries by Wang et al. (4) have demonstrated that Gab1 deficiency in the lung epithelial cells led to the deregulation of pulmonary surfactant production with an appearance of defected lamellar bodies and increased pulmonary susceptibility. The results were further confirmed by Gab1 over-expression mutants (Gab1∆Shp2, Gab1∆PI3K) in alveolar type II cells (AT-IIs). These works demonstrated that Gab1 plays an important role in the maintenance of alveolar homeostasis and functional integrity in AT-IIs. Interestingly, Gab1 has been identified to be a major susceptibility locus for bronchial asthma in a Japanese population by genome-wide association study (5). Gab1 is ubiquitously expressed at a relatively low level, but elevated in peripheral blood mononuclear cells (PBMCs) collected from asthmatic patients during acute exacerbation. Thus, it seems that Gab1 may be important in the pathogenesis of asthma.

The study published in Cell Research by Zhang et al. (2016) in the Ke group reported a novel role of Gab1 in regulating dendritic cell (DC) migration in allergic asthma (6). DCs are important myeloid-lineage cells linking innate and adaptive immunity. In particular, myeloid DCs (mDCs) are essential in allergic asthma because of their functions in antigen-binding, uptake, and subsequently activate naïve T cells in the lymph nodes and allergic inflammation. The authors hypothesized that myeloid Gab1 may participate in the pathogenesis of allergic asthma. To test this hypothesis, the authors first investigated Gab1 and Gab2, two ubiquitously expressed Gab genes, and found that Gab1 expression, but not Gab2, is significantly increased in PBMCs during acute exacerbation in asthmatic patients and mice. The author then showed that Gab1-deficiency in myeloid-derived cells affects allergen-induced allergic airway inflammation. Remarkably, the global myeloid Gab1-deficient mice (LysM-creGab1fl/fl) showed protection against OVA- and HDM-induced allergic asthma with reduced numbers of total leukocytes and eosinophils in BALF, Th2 cytokines levels (i.e., IL-4, IL-5, and IL-13), and mucus production compared to Gab1fl/fl mice. These findings supported the clinical findings and further suggested that Gab1 regulates allergen-induced allergic asthma and that myeloid Gab1 deficiency may protect mice from allergic airway inflammation. Furthermore, the author performed adoptive transfer experiments to distinguish which major subtype (e.g., macrophages or DCs) of myeloid cells contributed to the protective effect of asthmatic inflammation in myeloid Gab1-deficient mice. They clearly demonstrated that Gab1 in mDCs, but not macrophages, regulated allergic airway inflammation in asthma. To further confirm the findings, the author generated DC-specific Gab1-deficient mice by crossing Gab1fl/fl mice with CD11c-Cre mice. Consistent with the previous findings, CD11c-CreGab1fl/fl mice displayed an attenuated allergic lung inflammation upon allergen challenge with decreased numbers of total leukocytes and eosinophils in BALF, Th2 cytokines, and mucus production in the OVA-mouse model of asthma.

The authors also explored the mechanisms underlying the Gab1 in mDCs mediated allergic inflammation. They firstly analyzed the role of Gab1 in mDC maturation, antigen-uptake, and antigen presentation. Unexpectedly, no differences were seen between Gab1-deficient and WT mDCs. Interestingly, mDCs from either LysM-creGab1fl/fl or CD11c-CreGab1fl/fl mice exhibited impaired migration to the LNs. These findings raise the possibility that the attenuation of allergic lung inflammation in LysM-creGab1fl/fl mice may be due to defect in DC migration. To further determine the mechanisms for the Gab1-mediated migration, the authors hypothesized that Gab1 may be an essential component in the CCL19/CCR7 chemokine axis that regulates mDC migration during asthmatic responses. The CCL19/CCR7 signaling has been documented to be crucial for tissue DC migration (7,8). This study provided additional evidence that the loss of Gab1 impaired the chemotactic motility of mDCs by in vitro studies. Compared to controls, Gab1-deficient mDCs showed disorganized and blocked migration in response to CCL19 stimulation by in vitro live-cell imaging and Transwell assays, implying that CCL19 may play a role in Gab1-mediated mDC migration. Most impressively, the authors identified novel molecular mechanisms that Gab1 as a component of CCL19/CCR7 induced Rho/Pyk2 pathway, but not other previously reported Gab1-induced pathways, such as Erk/MAPK and PI3K/Akt (1). Co-immunoprecipitation assays identified a complex formed by Gab1, CCR7, Rho, and p115-RhoGEF (guanine nucleotide exchange factors) upon CCL19 stimulation and that CCR7 interact with Gab1 through its C-terminal domain (amino acid 332−378). It is concluded that Gab1 regulates the activation of CCL19/CCR7 signaling by facilitating the binding of p155-RhoGEF to Rho, finally activating Rho and downstream Pyk2, and thus contributing to Gab1-mediated DC migration (Figure 1). 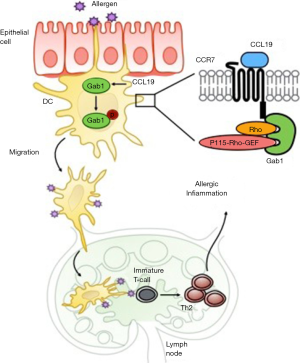 Although this study opens a new exciting avenue in the role of Gab1 in mDC migration, the molecular mechanisms underlying its implication in allergic asthma clearly requires further investigation. For instant, what is the exact role of Gab1-drived migrated mDCs in local inflammation? It is understood that Gab1 may not contribute to the DC antigen binding and uptake, however, the role of the Gab1-mediated downstream signaling in mDC biological functions in asthmatic inflammation is unclear. Although the authors indicated that Gab-deficient BMDCs displayed normal antigen presentation as defined by unchanged proliferation of OT-II CD4+ T cells, it would be of interest to determine whether Gab1-deficient DCs induce naïve T cell differentiation differently (e.g., Th1, Th2, and Th17) and its related mechanisms. Given the significance of Gab1 in mDCs in allergic inflammation, further validation is needed in asthmatic patients, particularly to see the differential expression of Gab1 in mDCs in peripheral blood during acute exacerbation in the same asthmatic patients previously used for the detection of Gab1 and Gab2 in PBMCs and subsequently antigen-presenting function. Furthermore, a proper cell type control may be need to determine whether the findings are unique to mDCs regarding the role of Gab1 in inducing Rho/Pyk2 pathway, but not Erk/MAPK and PI3K/Akt. Lastly, although both OVA and HDM-induced mouse models of asthma were applied in these studies, most data presented were from OVA, but not HDM model, one of the most common allergens..

In summary, the study by Zhang et al. demonstrated an unrecognized role for Gab1 as an essential docking protein in modulating allergic inflammation by regulating DC migration through activating Rho and p115-RhoGEF and subsequent Pyk2 (Figure 1). Experimental modulation of Gab1 expression in allergen-induced mouse models of asthma and a better understanding of the role of the Gab1 in DC biological functions will help to decipher the participation of Gab1 in allergic asthma. Together with the very recent findings from the same research group on the role of Gab1 in the maintenance of alveolar homeostasis and functional integrity in AT-IIs, Gab1 may be an attractive therapeutic target for allergic asthma.

Conflicts of Interest: All authors have completed the ICMJE uniform disclosure form (available at http://dx.doi.org/10.21037/jxym.2017.03.02). The authors have no conflicts of interest to declare.