Twenty years of lameness: a mystery

Spondyloepiphyseal dysplasia tarda with progressive arthropathy (SEDT-PA) is a rare hereditary disorder with a prevalence of 1/1,000,000, which affects men and women equally. It usually starts in early childhood with walking gait instability, short stature, joint pain, and limited mobility, with the symptoms progressively worsen. Clinical examination can reveal osteoporosis, scoliosis, hip degeneration, and even femoral head necrosis. Here we report a 26-year-old male patient who suffered from SEDT-PA since childhood, and genetic tests revealed a COL2A1 mutation.

A 26-year-old male patient was admitted on December 30th, 2016. He had suffered from pain in both hips for the past 20 years, which had worsened for more than 1 year. The patient felt pain in both hip joints without any apparent cause from the time when he was a student. The condition worsened when the weather changed or after excessive walking and fatigue but could be alleviated after rest. He did not seek treatment. In August 2015, after lifting his leg for riding a motorcycle, he heard a clicking sound at his left hip. Since then, he always felt aching and discomfort after a long walk, although the symptoms could be alleviated after rest. There was no low back pain, radiation pain, fever rash, or pain/discomfort in other parts of his body.

In August 2015, the patient was examined in Changsha Orthopaedic Hospital, where the X-ray of the hip suggested necrosis of the bilateral femoral heads was highly possible. The patient did not receive any special treatment, and the symptoms were not alleviated. On December 29th, 2016, he was presented to Chenzhou First People’s Hospital, where a second X-ray of the hips showed that bones at the bilateral femoral head and neck were absent, the bilateral upper femurs had an irregular shape and decreased density, and the bilateral acetabuli were shallow. Other findings included bilateral hip subluxation, pelvic osteoporosis, and blurred bilateral sacroiliac joints. He was then admitted to the Department of Endocrinology of our hospital to seek systematic diagnosis and treatment. The patient’s mental health, diet, and sleep were fair after the onset of illness. Urination and defecation were normal. His body weight did not change.

The patient is an electronic maintenance technician. He began to smoke 6 years ago and still consumes 10 cigarettes per day. He drinks occasionally. Other histories showed no particular record.

Physical examination revealed the following: (I) body temperature (T), 36.6 °C; pulse (P), 78 beats/min; respiratory rate (R), 16 breaths/min; and blood pressure (BP), 118/68 mmHg; (II) he was conscious. His body height was 150 cm, and his physical development was normal. He had an active position, limping into the ward. Examination of head/neck, as well as the heart, lungs, and abdomen, showed no apparent abnormalities. The chest was barrel-shaped, without evident thoracic/rib tenderness. His spine curved to the right without palpation tenderness over the spinous process. There was no obvious abnormality in the physical examination of the nervous system; (III) limping. The right lower limb was shorter than the left lower limb. The ranges of motion of both hip joints were slightly limited, with 80° of flexion, 10° of extension, and 10° of adduction and abduction. Obvious percussion pain was felt at the greater trochanters of both hips, and the axial percussion pain was positive in both lower limbs. Bilateral Patrick’s test showed positive results. The pulsation of bilateral dorsal pedal arteries was good, and the peripheral circulation of lower limbs was also good.

X-ray results: hand X-ray revealed no apparent abnormality (Figure 1). PA chests, spine X-ray, showed the horizontal trachea of the flat T2-4 vertebral body shifted slightly to the right. Centered on T7, the spine is slightly curved to the left, with multiple vertebral bodies flattening (Figure 2). Lateral cervical spine X-ray: multiple vertebral bodies become flattened (Figure 3). Pelvic X-ray: bilateral femoral heads and necks collapsed and were absorbed, especially on the right side. The bilateral acetabulum was shallow, the bony surface of the hip joint was rough, and the bilateral femoral heads were displaced outwards and upwards. Bone changes and subluxation of the bilateral hip joints were also observed (Figure 4). Double knee joint: osteoporosis is seen in both knee joints, and the outer portion of the right knee gap is slightly narrowed (Figure 5). 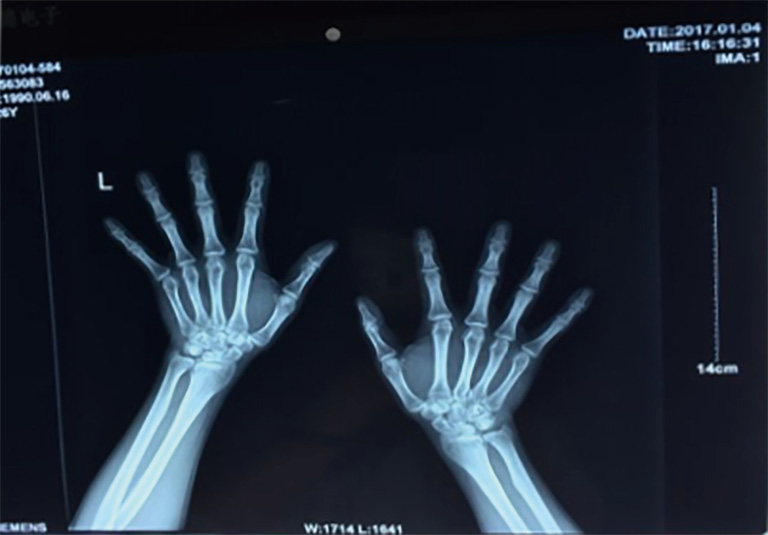 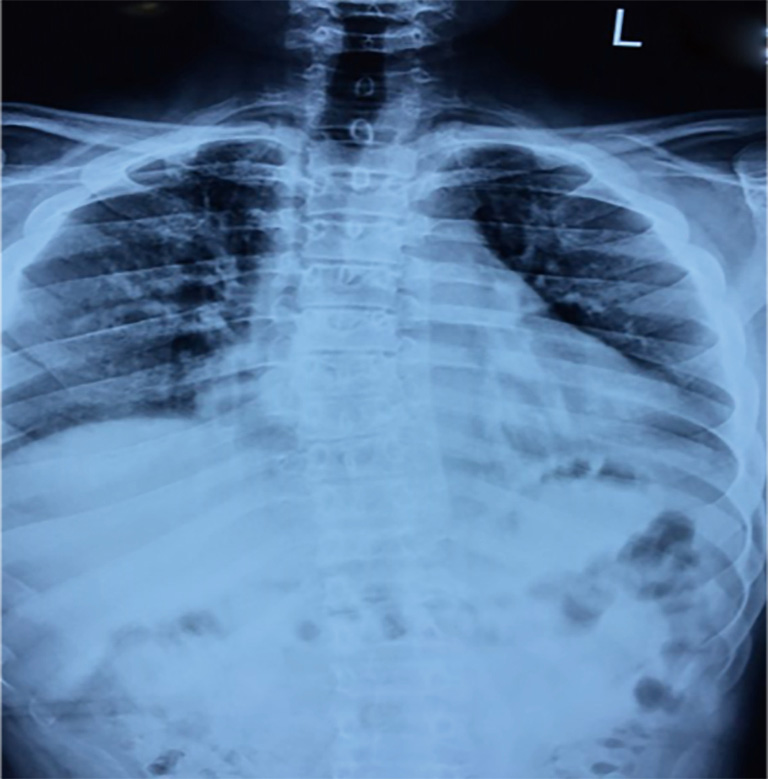 Figure 2 The horizontal trachea of the flat T2-4 vertebral body shifted slightly to the right. Centered on T7, the spine is slightly curved to the left, with multiple vertebral bodies flattening. 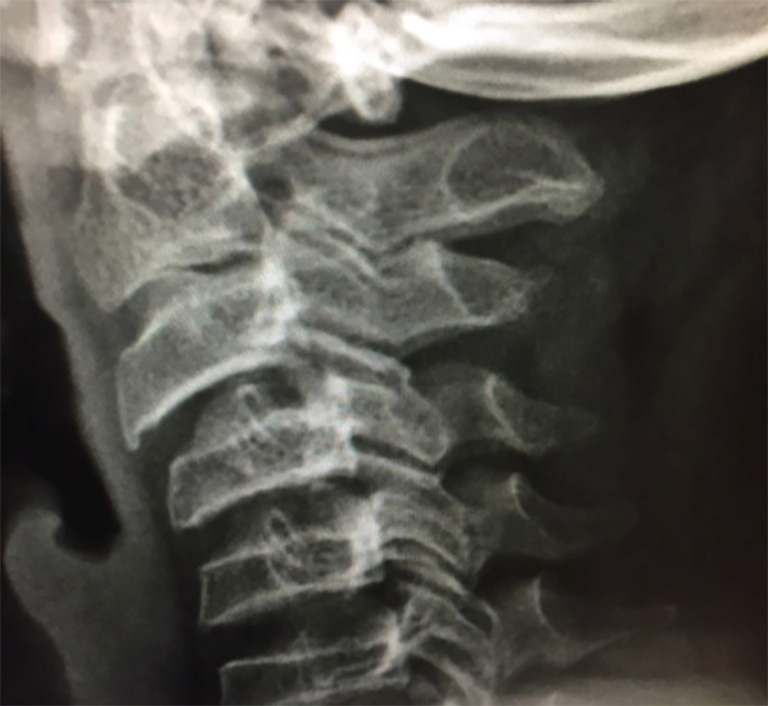 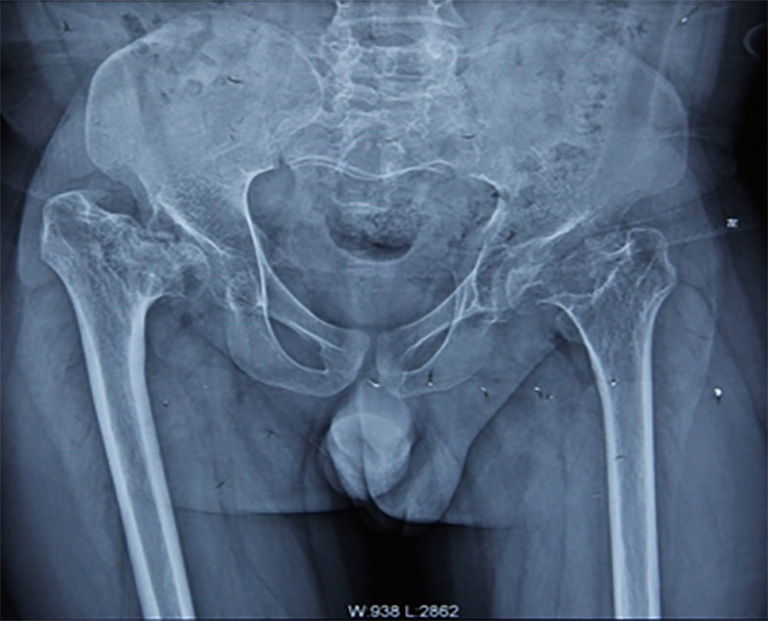 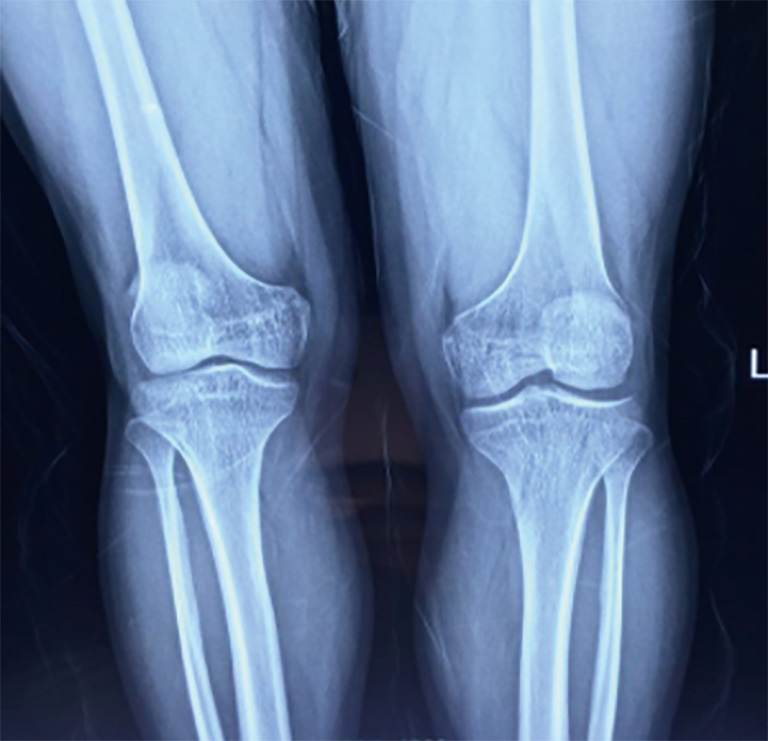 Figure 5 Double knee joint: osteoporosis is seen in both knee joints and the outer. portion of the right knee gap is slightly narrowed.

The patient suffered from lameness since childhood, with bone pain as the primary clinical manifestation. While his biochemical indicators were normal, he had hip dysplasia and lumbar vertebral deformity, showing short stature. Short stature caused by bone diseases was considered. After mucopolysaccharide disease, congenital hip dysplasia, and other diseases were ruled out, and, based on the result of genetic testing, a final diagnosis of SEDT-PA was made. Bilateral total hip arthroplasty was performed, and the lameness improved after surgery.

The patient suffered from typical bone and joint impairment from his childhood. It was important to inquire whether improper swaddling had affected his joint development. Biopsy of necrotic tissues during the surgery will be helpful for the diagnosis of this disease. The femoral head had been replaced in this patient; according to the life span of artificial joints, he may need to be operated on again in the future.

Department of Rheumatology and Immunology

The patient is a 26-year-old male who suffered from lameness since childhood. His bilateral hip joints and spine were involved, and he was short in stature. His son was also short in stature. Examinations showed hypokalemia, hypocalcemia, and osteoporosis. Osteoporosis can be either primary or secondary. Secondary osteoporosis can be caused by endocrine diseases, rheumatic diseases, blood diseases, kidney diseases, gastrointestinal diseases, genetic and metabolic diseases, drugs, and long-term bed-rest immobilization. In patients with rheumatic diseases, juvenile idiopathic arthritis can develop in childhood. The typical symptom is swelling of the joints in children under 16 years of age for more than 6 weeks, which can affect growth and development. Hereditary connective tissue disease is a group of heterogeneous diseases characterized by abnormal skeletal tissue, which mainly affects cartilage and bone (causing conditions such as skeletal dysplasia) but may also involve connective tissues (e.g., Marfan syndrome). Patients with hereditary connective tissue disease can also have progressive pseudorheumatoid dysplasia, which is a WISP3 gene mutation and an autosomal recessive inheritance pattern. Its clinical manifestations include swelling of the facet joints of both hands and involvement of the lower extremity joints. The imaging features include enlarged metaphysis, narrowed joint space, secondary osteoarthritis, scoliosis, and flat vertebrae. The specific diseases include dysplasia of the epiphysis of the spine and the spondylometaphyseal dysplasia. Mucopolysaccharide disease is currently not considered for the patient since there is neither a typical individual face nor intellectual impairment. Imaging also showed no unique manifestations of mucopolysaccharide disease.

The clinical features of the patient are summarized as follows: short stature, developmental dysplasia of the hip, femoral head necrosis, and vertebral body changes since childhood. The common causes of short stature include the following:

Based on both clinical manifestations and laboratory findings, the possibilities of dwarfness due to bone diseases or endocrine diseases were considered. Mucopolysaccharide disease, caused by the lack of lysosomal hydrolase, which degrades mucopolysaccharide, can result in the accumulation of a large number of mucopolysaccharides in tissues. Most of them are due to consanguineous marriage. The clinical manifestations of mucopolysaccharide disease include skeletal dysplasia (bird bill protrusion, flat vertebrae, ribbon rib deformity, and flat femoral head), typical individual face, liver and spleen enlargement, intellectual disability, and behavioral and language disorders. Since this patient did not have these characteristics in the manifestations, mucopolysaccharidosis was not considered. Congenital hip dysplasia is typically seen in female babies due to malposition of fetus, oligohydramnios, and improper swaddling, which did not match the medical history of this patient. Physical examination showed lameness and spinal deformity. Imaging revealed osteoporosis and joint deformity, suggesting that the disease leads to deformities in sites under more significant pressure. The patient also had vertebral changes. Based on both clinical manifestations and imaging findings, SEDT-PA was considered. The progressive osteochondral dysplasia, which mainly involves the epiphysis of the spine and the end of the long bone, is typically manifested as short-trunk dwarfism and secondary osteoarthritis. The next step is to inquire further about the medical history of the patient’s father and follow-up on the growth and development of the patient’s son.

Question 1: What were the possible causes of hip dysplasia and femoral head necrosis in this patient?

Type II collagen is the main matrix of the epiphyseal cartilage tissue of long bones and is also involved in epiphyseal modeling and longitudinal bone growth. In type 2 collagenopathies, abnormal endochondral ossification leads to dysplasia of the epiphysis and metaphysis. It also causes early osteoarthritis, especially in the hip joint. I consider that type 2 collagen and chondrocyte dysfunction cause changes like Perthes’s disease in the epiphysis and metaphysis at the growing age. Abnormalities in the femoral head growth plate and articular cartilage, in other words, impair normal growth of the epiphysis or cause necrosis of the epiphysis. And because of its repair mechanism, it shows characteristic findings such as flattening of the acetabulum, flattened femoral head, shortened femoral neck, and expansion of trochanter. So, hip dysplasia involves these deformations. In addition, when the above changes occur in adults, articular cartilage is damaged, which causes inflammation in the hip joint. It may have developed into so-called rapidly destructive coxarthropathy or necrosis of the bone head.

Question 2: What were the possible causes of ostealgia and osteoporosis in this patient?

In patients with type 2 collagenopathies, symptoms may occur in all joints where hyaline cartilage is present. Since the hip joint is a loaded joint, it tends to cause symptoms. It is reasonable that ostealgia can be interpreted as the fragility of articular cartilage. Type 2 collagen affects the formation of primary spongiosa. So, dysfunction of type 2 collagen may be related to hypoplasia of the primary spongiosa in long bone.

The clinical features of this patient include following: a short stature and disease inception in childhood; progressive suffering from joint pain and limited movement; vertebral bodies becoming flat, along with the progression of scoliosis and osteoporosis; and degenerative osteoarthropathy in the hip joints, with femoral head necrosis and COL2A1 gene mutation. The diagnosis was SEDT-PA. SEDT-PA caused by a mutation in the COL2A1 gene has been reported in other countries (1-4) and in China (5). Since it is an autosomal dominant pattern of inheritance, one of the parents of the patient must also have been a patient. However, currently, there are no genetic test results for the father of the patient. Therefore, genetic testing for SEDLIN, AGC1, and WISP3 should be performed in the patient, his father, and his son.

During the follow-up, it is vital to observe the changes in the patient’s condition as well as the growth and development of the skeletal joints of the patient's son.

Unfortunately, in this case, the patient’s femoral head tissue was not harvested for pathologic examination; this is a reminder that effective communication among the multidisciplinary teams is essential.

Conflicts of Interest: All authors have completed the ICMJE uniform disclosure form (available at http://dx.doi.org/10.21037/jxym.2020.03.01). The authors have no conflicts of interest to declare.

Ethical Statement: The authors are accountable for all aspects of the work in ensuring that questions related to the accuracy or integrity of any part of the work are appropriately investigated and resolved. Written informed consent was obtained from the patient for publication of this case report and any accompanying images.