According to the latest report from the International Diabetes Federation, 415 million people worldwide suffer from diabetes and this number is projected to rise to 642 million by the year of 2040 (1). Types 2 diabetes is the most common diabetes type characterized by high blood glucose. As a chronic metabolic disorder, it represents the leading cause of macrovascular and microvascular complications including cardiovascular disorders, kidney failure, blindness and lower limb amputation. Although the knowledge in the pathophysiological process of diabetes mellitus has greatly accumulated in recent years, the cellular and molecular mechanisms underlying its genetic pathogenesis remain very limited (2).

Growing evidence are suggesting that a combination of genetic and environmental factors contribute to the development of type 2 diabetes. In recent years, genetic factors including receptors and key enzymes are being frequently researched (3). Of particular interest is the cytochrome P450 gene superfamily involved in drug metabolism as well as synthesis of cholesterol, steroids and other lipids (4). As its major isoform, CYP2C19 acts on 10–15% of drugs in current clinical use, including proton pump inhibitor, platelet aggregation inhibitor, and anti-depressants (5). CYP2C19 also has the capacity of metabolizing polyunsaturated fatty acids (6). Due to its pivotal role in lipid metabolism and proton transfer in mitochondria, CYP2C19 could be a potential candidate for treating type 2 diabetes. CYP2C19 gene consists of 9 exons spanning approximately 90 kb and encodes a protein of 490 amino acids. Approximately 30 variant alleles of CYP2C19 have been identified thus far. Several mutations on CYP2C19 gene have been well documented, such as wild-type allele *1, and mutant alleles *2, *3, *4, *5, *6, *7 and *8. The *1 allele is the wild-type allele that encodes full length of CYP2C19 enzyme. The *2 and *3 alleles are the most common variants and result in a complete loss of enzymatic activity (7,8). However, the relationship of these CYP2C19 variants with type 2 diabetes are not yet well understood. In the present study, we attempted to investigate the association of CYP2C19 polymorphisms with type 2 diabetes in the Chinese population.

This study was conducted from 2012 to 2015 at The General Hospital of Western Theater Command. Overall, 575 participants were enrolled in this study, including 226 cases of glycometabolism disorder (GMD) and 349 cases of healthy control with normal glucose metabolism (NGM) (432 males, 143 females; mean age 70±14 years). Among the GMD patients, 62 of them were diagnosed with type 2 diabetes. Subjects with family history of diabetes or coronary heart disease were 10.78% and 58.26%, respectively. Blood samples were collected for further biochemical analysis. Diagnosis of type 2 diabetes mellitus and cardiovascular disordersare made according to WHO diagnostic criteria. The study was approved by the institutional review board of The General Hospital of Western Theater Command and written informed consent was taken from all participants.

Continuous variables were expressed as mean ± standard deviation (SD) and categorical variables were reported as counts and percentages. Analyses of t-tests and chi-square tests were used to examine the differences between control and disease group. Multivariate logistic regression analysis was used to identify independent predictors of type 2 diabetes. Analyses were performed using SPSS version 19.0 statistical software. A value of P<0.05 (two-tailed) was considered significant difference (10). The P value is accurate to three decimal places using SPSS (11).

A total of 575 participants’ CYP2C19 genotypes were performed based on gene microarray (BaiO, Shanghai), and biochemical measurements based on biochemical reaction from Beckman Coulter platform.

Clinical and biochemical characteristics of participants

The clinical profile of the GMD group and the NGM group are summarized in Table 1. As expected, the fast blood glucose, a key criterion of diabetes, was significantly higher in GMD group in comparison with NGM group. Deregulation of lipid metabolism is also a common clinical symptom of type 2 diabetes. Hence, the major lipids, TG was dramatically increased in GMD group, while HDL-C was reduced in GMD group. No significant difference of TC, LDL-C, and Cystatin C were observed between two groups. 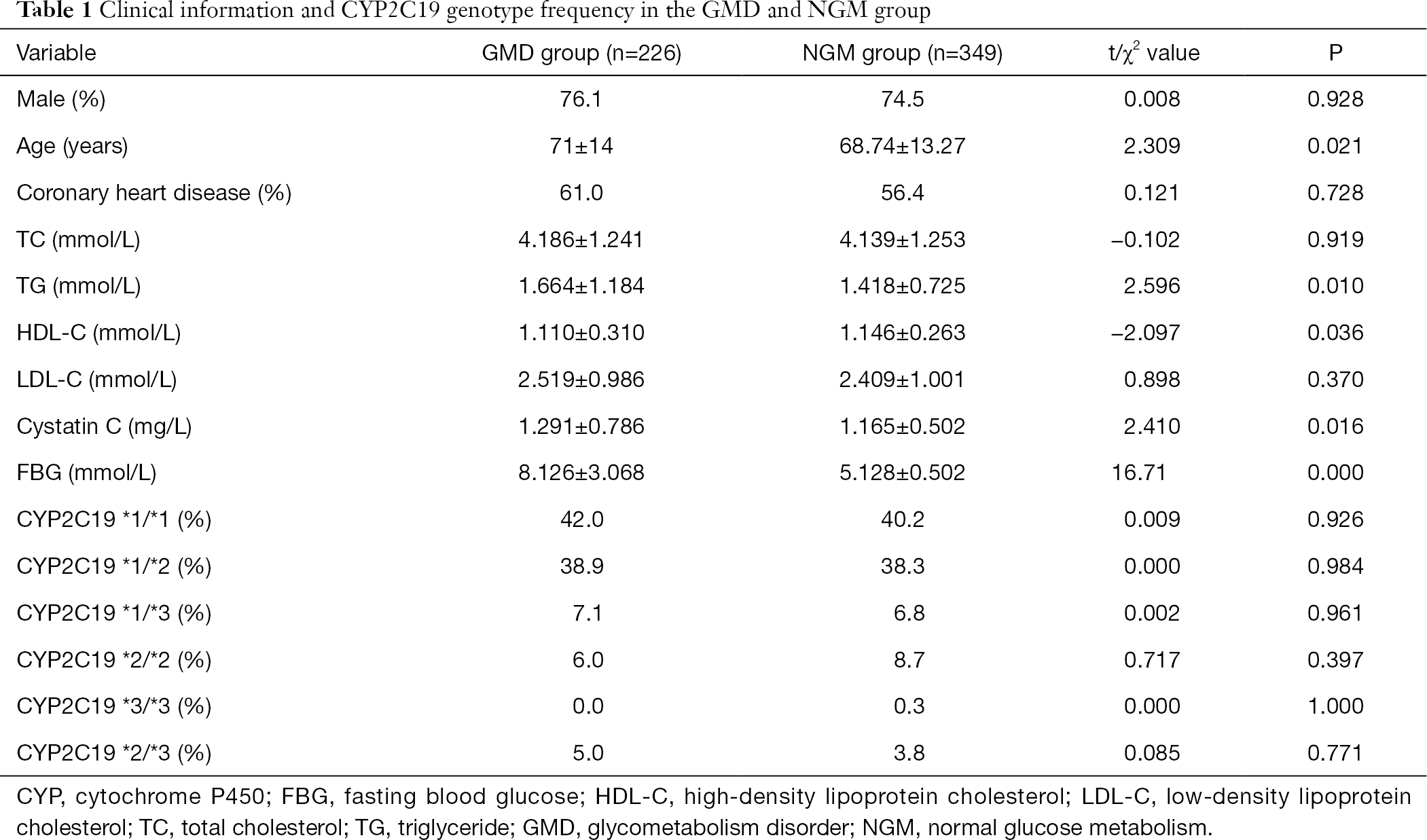 No association of CYP2C19 genotypes with GMD 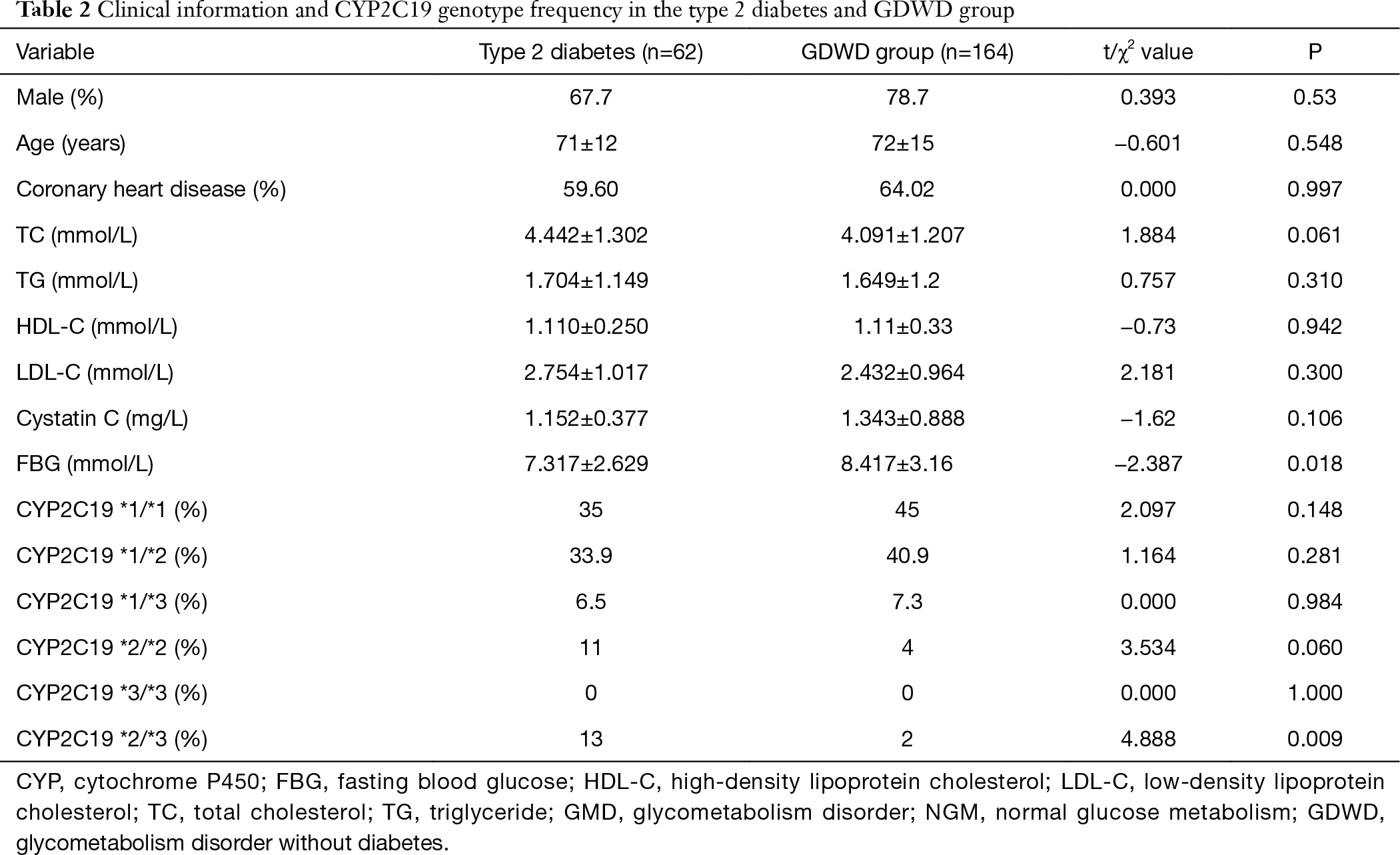 CYP2C19 is located within a cluster of cytochromes P450 genes on chromosome 10q24, which contains nine exons and eight introns (14). The gene encodes a 490-aa long protein of approximately 56 kDa, which is a member of the cytochrome P450 superfamily of enzymes. CYP2C19 is a clinically significant drug-metabolizing enzyme and its genotyping and phenotyping information have the potential to improve drug safety and efficacy (15). At least 27 variant alleles for CYP2C19 have been identified, with the most extensively described being CYP2C19*2, CYP2C19*3 in Chinese population (16).

Indeed, type 2 diabetes mellitus results from the interaction between genetic and environmental factors, leading to heterogeneous and progressive pancreatic β-cell dysfunction (20). In particular, glucocorticoids are known to exert deleterious effects on the glucose metabolism, leading to a wide range of alterations from insulin resistance to diabetes. Under stress condition, glucocorticoids also regulate cytochrome P450 family (21). Since CYP2C19 expression is regulated by constitutive and rostane receptor (CAR) involved in glucocorticoids synthesis, it is reasonable to propose that there are certain interactions between CYP2C19 double mutant genotypes and type 2 diabetes through some of these receptors in charge of cholesterol regulation and bile acid.

Authors are grateful to the staff of the Department of Medical Laboratory (The General Hospital of Western Theater Command) for their technically assistance throughout this study. We also thank all the volunteers who have participated in this research.

Funding: This study was supported by applied basic research project of the Science and Technology Department in Sichuan (grant No. 2013JY0173) and The General Hospital of Western Theater Command Routine Management Project of Science (grant No. 2016KC04).

Ethical Statement: The authors are accountable for all aspects of the work in ensuring that questions related to the accuracy or integrity of any part of the work are appropriately investigated and resolved. The study was approved by the institutional review board of The General Hospital of Western Theater Command and written informed consent was taken from all participants.