Systemic sclerosis (SSc) is a multisystem autoimmune disease characterized by vasculopathy and tissue fibrosis of the skin and various internal organs (1). There is no cure for SSc, leading to significant morbidity, mortality and poor health-related quality of life (2). The prevalence varies greatly in recent reports, and most rates fall between 38 and 341 total cases/million (3).

SSc is a complex disease and its pathogenesis is not well understood. Pulmonary arterial hypertension (PAH) is a frequent and severe complication of SSc (4). Pathogenesis of PAH is complicated and multifactorial. The prevalence of PAH in SSc (SSc-PAH) has been estimated to be between 5% and 12% (5). Some studies reported that the potassium voltage-gated channel shaker-related subfamily member 5 (KCNA5) rs10744676 might be linked to PAH, the results in different studies have been conflicting (6). Therefore, we performed a meta-analysis to assess the association of the KCNA5 rs10744676 polymorphism with the risk of SSc-PAH.

Firstly, the main literature databases at home and abroad (PubMed/Medline, EMBASE, Scopus, Cochrane Library, CNKI, Wanfang database) were searched by computer, and then the references of related articles were searched twice to reduce missed detection. The following search terms were used: KCNA5, rs10744676, systemic sclerosis, pulmonary hypertension. The publication time of articles was set to the time of database construction until February 6, 2019. The language was limited to English and Chinese.

The original article types included in our study included cohort studies and case-control studies. Subjects must include SSc patients, SSc with PAH patients, and healthy controls. The original articles were to compare the KCNA5 gene variant (rs10744676) between SSc-PAH patients and healthy controls. If subgroup data is to be included, we select the group with more cases. Exclude animal studies, case reports, conference abstracts, reviews, drug trials, and languages other than Chinese or English, articles that do not have full text or incomplete data.

Two researchers independently screened and read articles, and extracted article data. The quality evaluation was based on the Newcastle-Ottawa Quality Assessment Scale (NOS) of the case-control study. According to this scoring standard, a maximum of 9 points can be obtained for each case-control study. When the data extraction and quality evaluation process encountered inconsistencies, it was resolved through discussion.

The heterogeneity of each study was evaluated using the Cochrane Q test and I2. When I2 ≥50%, there was heterogeneity between studies. In order to minimize bias, all meta-analytical steps in our study were selected as random effects models. The data of our study is the quantitative data, the odds ratio (OR) and 95% confidence interval (CI) are selected as the effect scale indicators. Funnel-plot was used to identify the publication bias. Except for the Cochrane Q test using P<0.1 for the difference was statistically significant, the other tests were defined as P<0.05 for the difference was statistically significant. Statistical analysis was performed using RevMan 5.3 software provided by the Cochrane Collaboration.

Basic information of the articles included

By searching the Chinese and English databases, a total of 507 original articles were obtained. After eliminating the duplicates, reading the titles and abstracts, there were 3 articles satisfying the research topic. One of the 3 articles reported the gene mutation sites which did not match, as a result, it was excluded. Finally, 2 articles (7,8) were included in our research. Baseline data and search process are detailed in Table 1 and Figure 1, respectively. 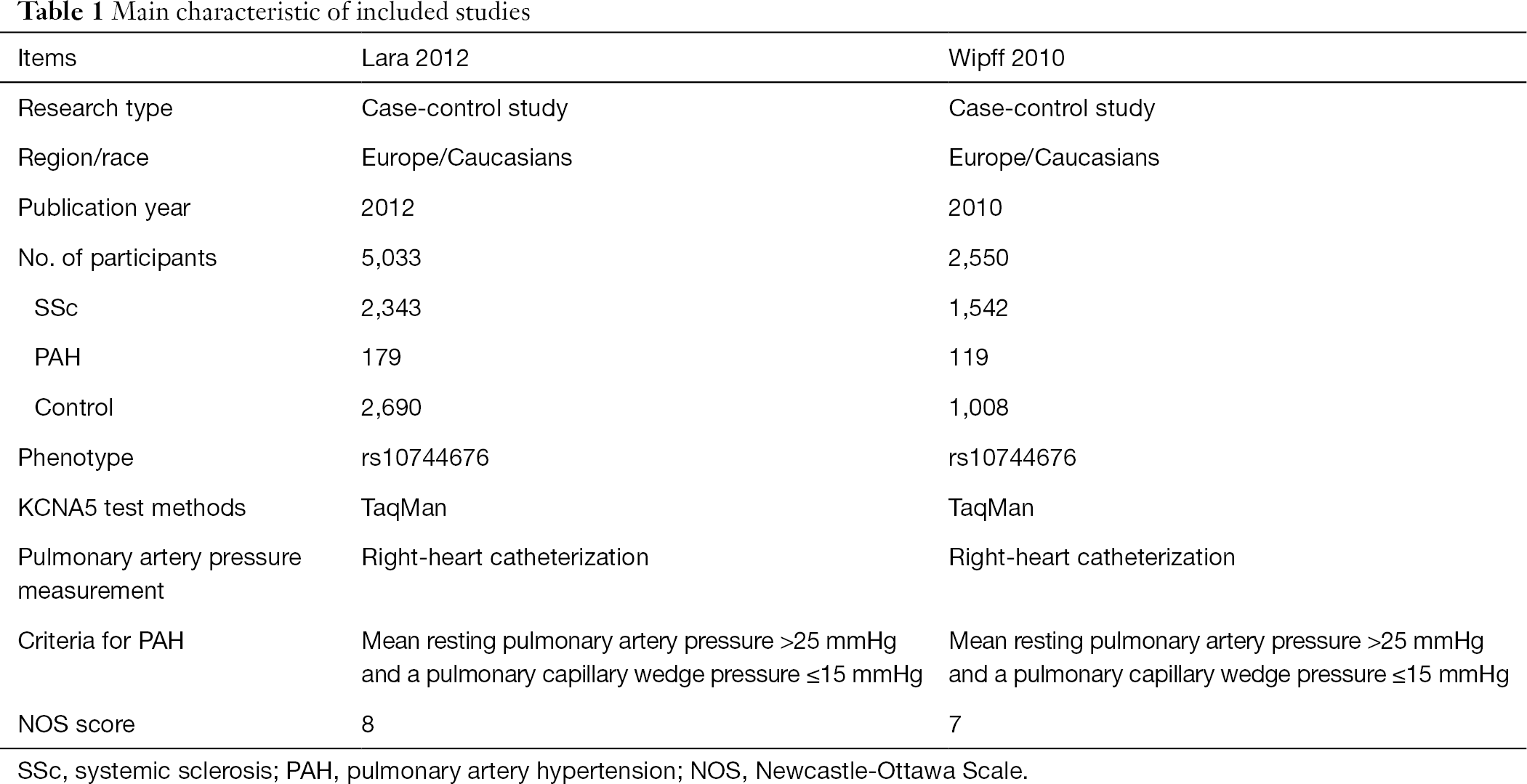 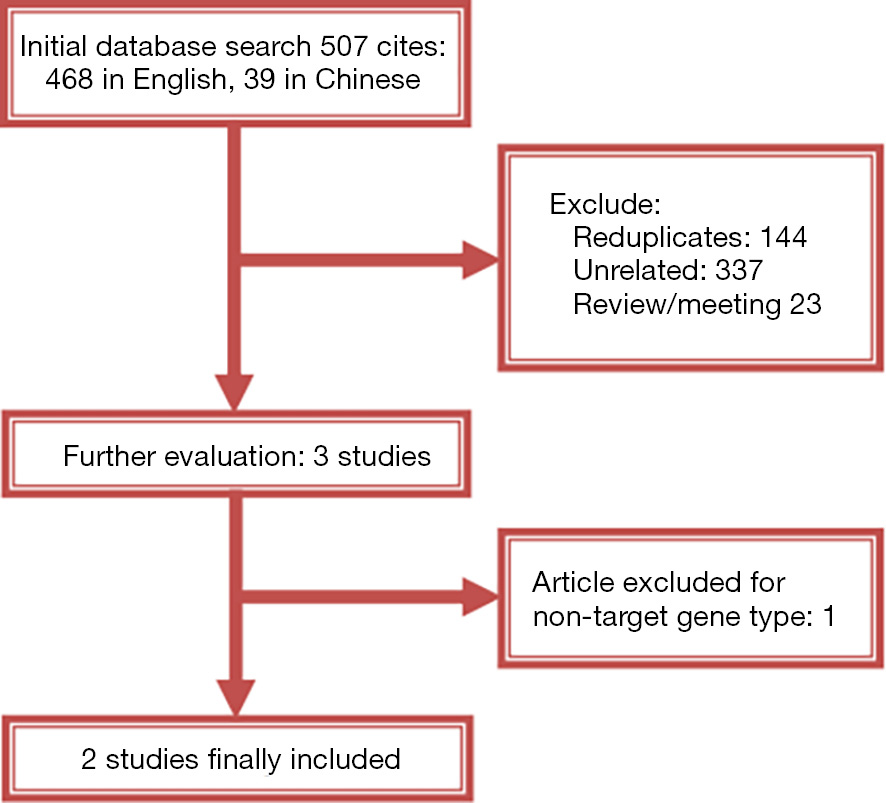 Figure 1 Screening process of the literature. 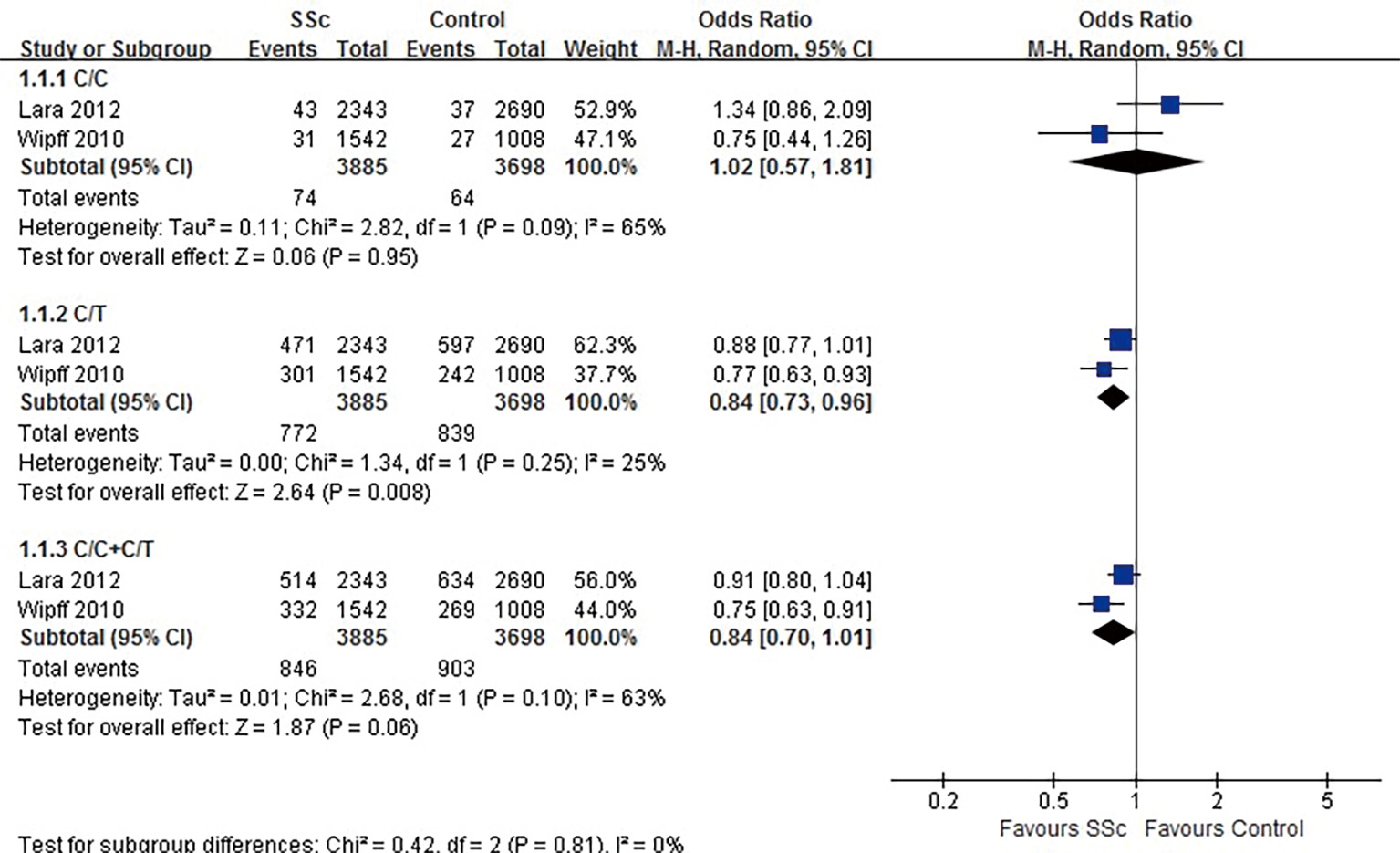 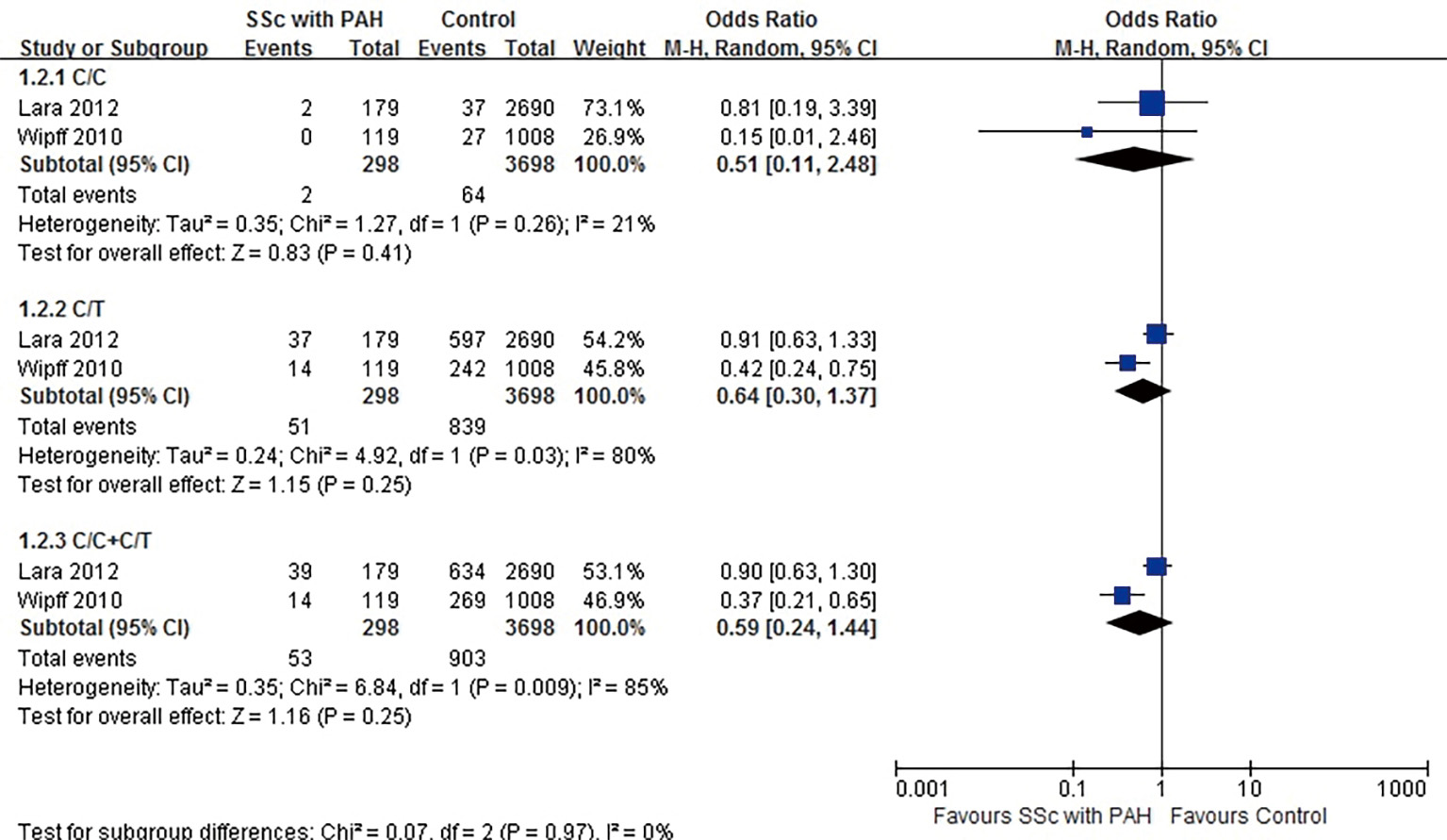 The present study performed a statistical analysis of the data from two original articles and found no significant differences in the ratio of KCNA5 gene mutations between patients with SSC-PAH and controls. The KCNA5 gene has not been confirmed to be an SSc-PAH genetic susceptibility factor.

SSc is a multisystem disease with vascular, inflammatory and fibrotic components, the mortality of SSc is high (9). PAH is a frequent complication of SSc and is one of the leading causes of morbidity and mortality in patients with this disease, patients with SSc-PAH have a 3-year survival rate of 52% (10). The pathogenesis of PAH is complex and incompletely understood, but includes both genetic and environmental factors that alter vascular structure and function (11). Multiple genes have been shown to be associated with PAH, Nicholas et al. found that BMPR2, EIF2AK4, TBX4, ATP13A3, GDF2, SOX17, AQP1, ACVRL1, SMAD9, ENG, KCNK3 and CAV1 genes have high evidence for causal effects in PAH (12). Single nucleotide polymorphisms in KCNA5 have been reported in PAH patients. It is suggested that KCNA5 is a genetic risk factor for the disease and KCNA5 has roles in determining pulmonary vascular tone, oxygen sensing, cell proliferation, and apoptosis (13,14). Although our data do not support an important role of KCNA5 rs10744676 as a PAH genetic marker in SSc patients. It is the first meta-analysis to analyze the association between KNCA5 and SSc-PAH, providing evidence-based medical evidence.

There are several potential limitations in this study. Firstly, only publications in English and Chinese were considered in the search process. Secondly, only two eligible studies and 7,583 participants were enrolled for meta-analysis, which was relatively few. Moreover, both of the studies were retrospective case-control studies which would lead to a recall bias inevitably. Therefore, all these contributed to the risk of bias in a certain degree. More large-scale studies are required in the future.

The pooled analysis of available data indicates that KCNA5 rs10744676 is not confirmed as an SSc-PAH genetic susceptibility factor.