Prevalence of hypertension and associated risk factors among a group of prisoners in Yaoundé Central Prison: a cross-sectional study

Hypertension is a major public health problem in the world, with a global prevalence estimated at 1.13 billion in 2015 and responsible for about 18 million people deaths yearly (1,2). Otherwise, more than 50% of deaths from coronary heart disease (CHD) and stroke occurred in people with hypertension (3). By 2025, it is estimated that about 1.5 billion of the world’s population will be hypertensive. The prevalence in the United States of America (USA) was estimated at 30.2% in 2015 (4). With American College of Cardiology (ACC) and American Heart Association (AHA) new guidelines recommendations for diagnosis of elevated blood pressure and therapy, the burden is increasing to 46% of the population in USA (5).

Racial disparities in hypertension prevalence and control are recognized for the past 4 decades (6,7). In Africa, hypertension remains one of the principal cardiovascular risk factors affecting approximately 30% of adults (8). Recent studies on hypertension in Nigeria and in the Democratic Republic of Congo showed similar results with respectively 28.9% and 30.9% of prevalence (9,10). In Cameroon, the prevalence is increasing in the general population, rising from 20.8% in 2007 to 24.2% in 2012 and 29.7% in 2015 ame (11-13). There is a regional disparity between rural and urban area, with a rural prevalence of hypertension lower than the urban one but rising with time (14-16).

Blood pressure has been shown to vary according to constitutional factors such as age, weight, race and sex. The association between these factors and hypertension is known, although the mechanisms involved remain obscure. Other factors are also described: heredity, genetic predisposition, the influence of the environment, lifestyles such as salt consumption and sedentary lifestyle. However, the contribution of other factors such as stress (professional, family and social) is far from unanimous (17). The westernization of lifestyle, as well as the lack of information of patients on their pathology resulting in the refusal of treatment for life in the absence of obvious symptoms and the impact of traditional medicine in rural areas, surely explain the prevalence of elevated blood pressure in our environment. The resulting morbidity and mortality are all the more important (18).

This work was approved by the institutional board of the Faculty of Medicine and Biomedical Sciences, University of Yaoundé I, Cameroon. This work was carried out in accordance with the declaration of Helsinki (24).

We conducted a cross-sectional study from January to July 2017 among prisoners at the Yaoundé Central Prison. This is the main prison in Yaoundé, the capital city of Cameroon (SSA), with a population of 2 million individuals. The carceral population is evaluated at 4,859 inmates in July 2017. This prison was initially built for 800 prisoners. It consists of 206 rooms divided into 13 quarters. Promiscuity and malnutrition rate are high among prisoners. Bedding condition are poor: most of prisoners sleep on mattress laid on the floor. Physical activities are rare (25). There are only two doctors for managing all prisoners.

We included consenting subjects, seen in the in-prison clinic. Subjects were approached regardless of the duration of diagnosis or follow-up. Pregnant women, patients with in-prison stay less than three months, patients not seen at the second passage and non-consenting patients were excluded. According hypertension prevalence in Cameroon, minimal sampling was calculated at 320 prisoners. Administrative authorizations were obtained prior to the completion of this study.

The screening was conducted by trained medical personnel at the clinic. All participants were subjected to a face-to-face interview. All prisoners, consenting to participate, where seen twice at 1-month interval. Data were collected (using a standardized questionnaire) on demographics, incarceration characteristics (duration, the reason of detention, the severity of condemnation, the number of monthly visit), smoking habits and alcohol consumption, diabetes and hypertension history including drugs treatment and complications and other cardiovascular risk factors.

The physical examination included BP and anthropometric measurements. BP (systolic and diastolic) was measured in chair-seated patients at left arm after 5 minutes by the same medical personnel. BP measurements were performed using automated sphygmomanometers (OMRON, Kyoto, Japan), with appropriate cuff size. Mean BP of both visits was registered. Weight (in kg) was measured in participants on light clothing using an automated scale. Height (in m) was measured using a wooden platform and a height rule. Body mass index was calculated as weight (kg)/height (m) × height (m). Waist circumference was measured between the iliac crest and the lower rib margin and the hip circumference was measured at the intertrochanteric level. The selection process is summarized on Figure 1. 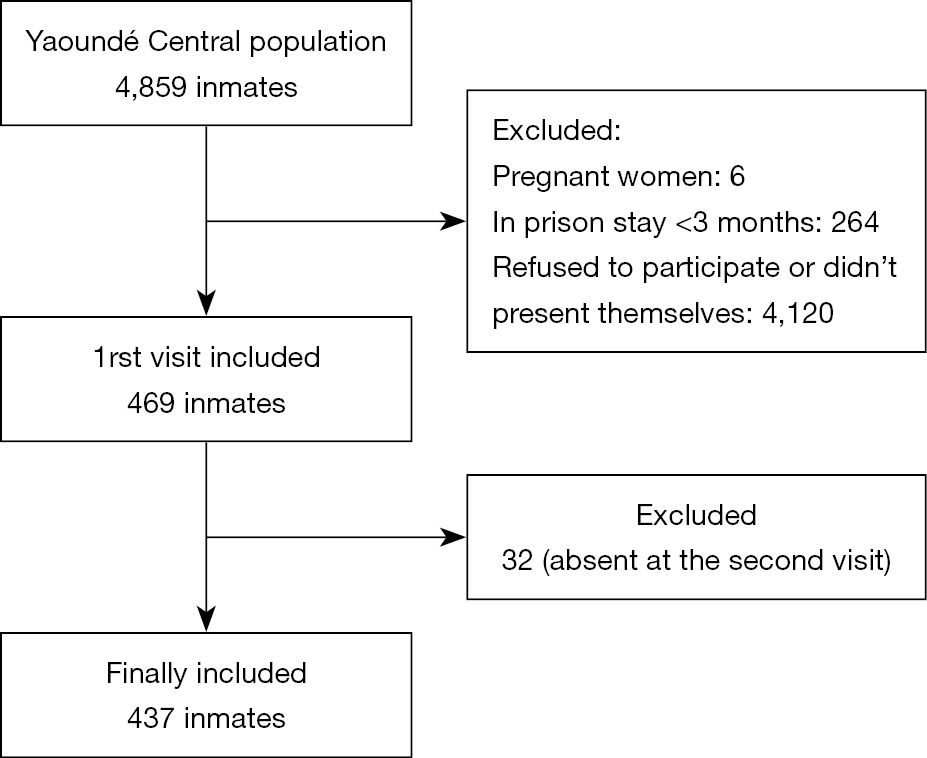 Waist circumference >94 cm in men or 80 cm in women was considered to be high. Excessive alcohol consumption was based on intake either more than 3 (2 for women) standard glasses of wine per day or more than 10 (5 for women) local beers per week. Traditional alcohol beverage was not assessed. Participants who smoked at least one cigarette per day were classified as current smokers.

Weekly leave permission of 0 was considered as low. A rate of 1–2 leaves per week was classified as average as and more than 2 per week as high.

Sentence severity was classified into short (<5 years), average (5 to less than 15 years) and severe (>15 years). By the same, an incarceration length <5 years was considered as short, between 5 and 15 years as average and more than 15 years was high.

Data were analyzed using Statistical Package for Social Sciences (SSPS Inc., Chicago, Illinois, USA) V.20.0 and EPI-INFO V.3.5 software. Results are summarized as counts and percentages for qualitative variables and mean and standard deviations (SD) for quantitative variables. Groups comparisons used Chi-square tests and equivalents for qualitative variables and student t-test, analysis of variance for quantitative variables We calculated the odds for each parameter studied in inmates having hypertension compared with those who do not have hypertension. A P value <0.05 was used to characterize statistically significant results. Using significant parameters, a multivariate analysis by logistic regression will be made. 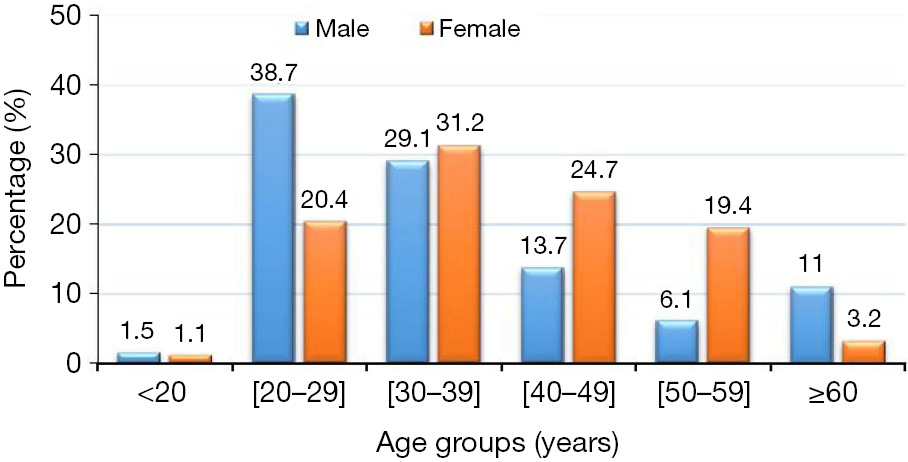 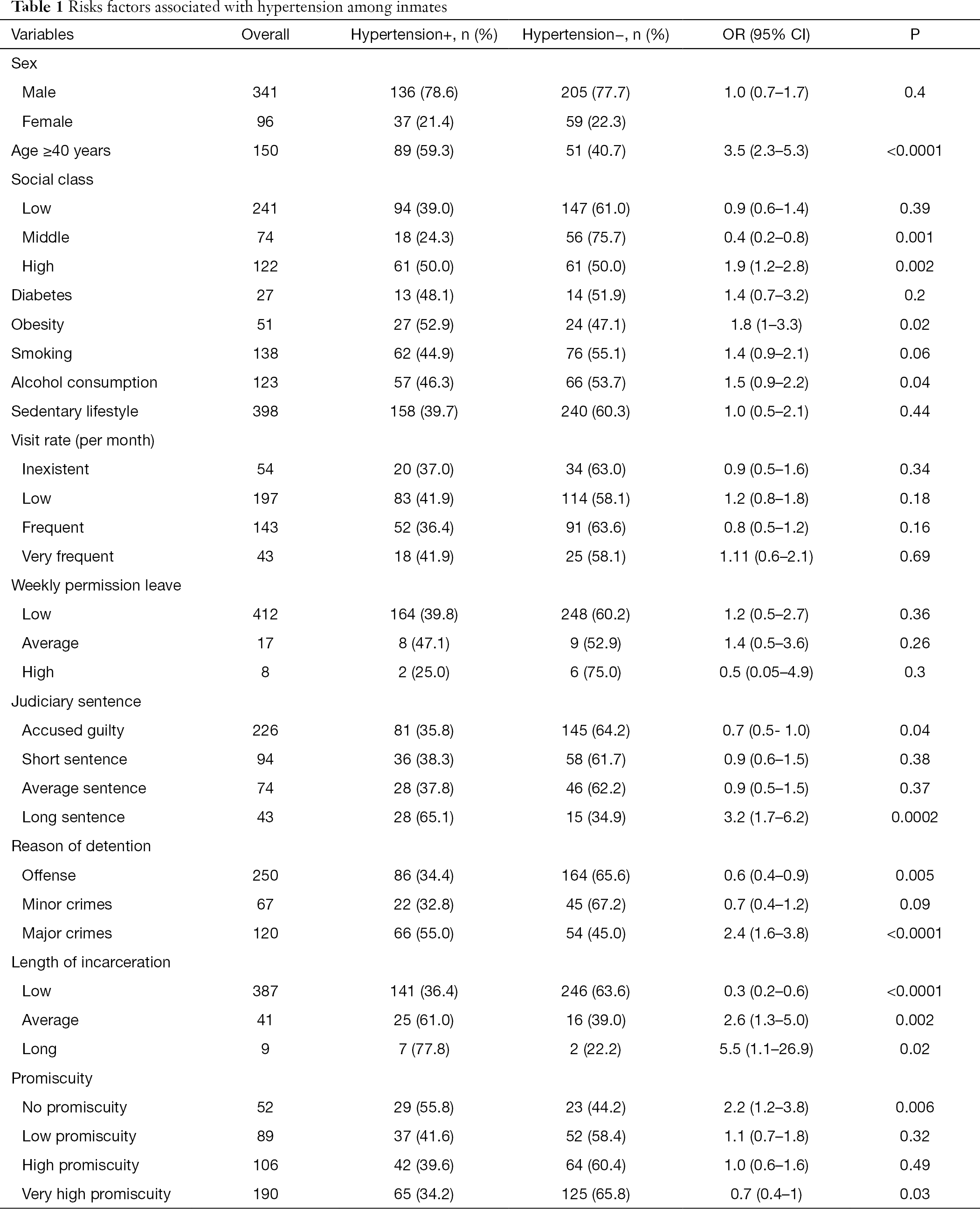 In multivariate analysis, only age (>40 years), middle social class and alcohol consumption were associated with hypertension among inmates (Table 2). 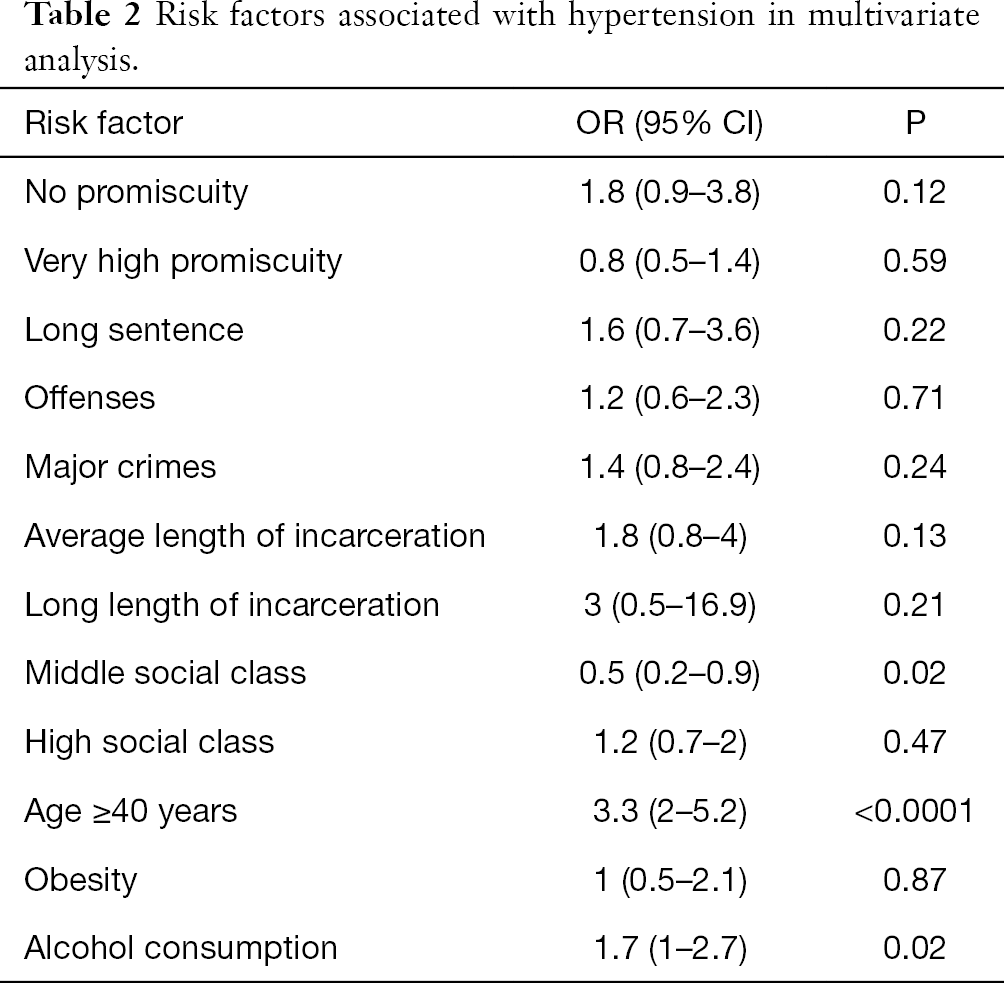 We carried out this cross-sectional study to assess the prevalence of hypertension and their associated risk factors among a group of prisoners in an sub-Saharan African setting. This study represents the first published analysis of hypertension in a specific population of inmates in Africa.

Non-communicable disease among prisoners has not been fully explored in Africa (27-29). Hypertension’s burden among prisoners particularly is still poorly known in Africa. Few studies on its prevalence and risk factors have been carried out (22). Hypertension prevalence is known to be increased among inmates in a western country (30-32). However, there is no data in Africa and particularly in Cameroon for its prevalence and risk factors.

This study should be interpreted in light of some limitations. Our study population was small compared to other studies done on this subject. Another limitation was the fact that the study relied on a population census that was not designed to explicitly measure the effect of exposure to incarceration (length). Our capacity to make causal inferences is limited by the cross-sectional design of the study.

Regarding the high prevalence of hypertension and some CVRFs among prisoners, there is a need to implement preventive strategies for hypertension. This goes through a precise screening of patients with multiples CVRFs, diet modification, alcohol and smoking cessation policies and increase physical activity. It would be therefore important to increase caregiver’s number in order to optimize prisoners care. Meda et al. emphasized on health promotion among prisoners for preventing diseases and strengthening prisoners’ resilience but they only prioritized infectious diseases (38).

We thank all the stall of the infirmary of the Yaoundé Central Prison and its director. We would like also to thank Professor Marc Leeman for his valuable contribution to improve the quality of English and the scientific value of this research.

Ethical Statement: This work was approved by the institutional board of the Faculty of Medicine and Biomedical Sciences, University of Yaoundé I, Cameroon and written informed consent was obtained from all patients.