Acute renal infarction (RI) is rare and may even be an under-recognized disorder. For instance, in a study of almost 250,000 patients seen at an emergency department, only 0.007% were diagnosed with acute RI (1). However, the frequency of RI is likely higher than that reported in this clinical study because the symptoms of a patient with acute RI mimic those of more common diseases. Consequently, a diagnosis of RI may be either missed or delayed. In fact, a previous study of 144,411 autopsies showed that the incidence of RI was 1.4% (2), which is much higher than the rate reported in the emergency department. A sentinel loop observed on plain radiography is a known sign of paralytic ileus that is associated with inflammation of several intra-abdominal organs (3,4). However, the association of a sentinel loop with acute RI has not been described in previous literature. Herein, we report a case of acute RI complicated by paralytic ileus of the small bowel that presented as a sentinel loop in a patient with atrial fibrillation (AF).

A 58-year-old man with a medical history of AF was admitted to our hospital because of pain in the left flank and left lower back. At 30 years of age, he had visited another hospital due to intermittent palpitations and chest discomfort, and was diagnosed with AF. He took medications for four years, but then discontinued their use without permission from healthcare providers because his symptoms had disappeared. His familial history was unremarkable. Two nights prior to admission to our hospital, the patient experienced pain in the left flank, and the day before coming in, he had left lower back pain. He visited a nearby clinic, and was then referred to the emergency department of our hospital because of a suspicion of small bowel obstruction noticed on plain abdominal radiography.

A physical examination provided the vital signs as follows: blood pressure of 149/98 mmHg, irregular pulse, a pulse rate of 95 beats per minute, and a body temperature of 38.6 °C. Jugular venous distension was not noted. A grade 2 systolic murmur was detected at the apex of the heart. The patient’s abdomen was slightly distended, and bowel sounds were hypoactive with an absence of high-pitched “tinkling” sounds. Tenderness was present in the left flank without guarding or rebound, and there was knocking pain in the left lower back. No edema was evident in the lower limbs.

Chest radiography showed cardiomegaly (cardiothoracic ratio of 58%) but no pulmonary vascular congestion. An abnormal accumulation of gas in the small bowel was observed on plain abdominal radiography, mainly on the left side (Figure 1). An abdominal plain computed tomography (CT) scan revealed a distended small bowel with air-fluid levels near the left kidney (Figure 2A). These findings from the physical examinations and radiological analysis were consistent with a diagnosis of paralytic ileus. Urinalysis revealed 3+ protein level and 2+ occult blood level, and there were 10 to 19 red blood cells and 0 to 1 white blood cells per high-power field. Other notable hematological examination findings included a white blood cell count of 18,800 cells/µL (normal range, 3,300–9,000), a C-reactive protein level of 8.85 mg/dL (<0.4), an aspartate aminotransferase level of 151 U/L (range, 8–38 U/L), an alanine aminotransferase level of 100 U/L (range, 4–44 U/L), a lactate dehydrogenase (LDH) level of 1,495 U/L (range, 106–211 U/L), a creatinine level of 1.22 mg/dL (range, 0.6–1.1 mg/dL), a brain natriuretic peptide level of 1,495 pg/mL (<100), a fibrinogen level of 797 mg/dL (range, 200–400 mg/dL), a fibrin degradation products level of 6.5 µg/dL (<5) and a D-dimer level of 1.90 µg/dL (<0.5). Because of the hematuria and elevated serum LDH levels, the presence of acute RI was suspected. Therefore, dynamic contrast enhanced CT (CE-CT) was performed, and the presence of left RI was confirmed (Figure 2B). CT angiography further indicated a distal artery obstruction in the left kidney (Figure 2C). Four months later, a shrunken infarction area in the left kidney was noted (Figure 2D). Findings from a renal isotope scan were also consistent with left RI. A 12-lead electrocardiogram showed AF at a heart rate of 94 beats per minute with high QRS voltage in leads V5 and V6, and T wave inversion in leads I, II, aVF, V5 and V6. Transthoracic echocardiography showed an interventricular septum thickness of 9 mm, a posterior wall thickness of 12 mm, and diffuse left ventricular hypokinesis (left ventricular ejection fraction of 24%), mimicking dilated cardiomyopathy. The thrombus within the left atrium was not visible. Coronary angiography was normal, whereas cardiac left ventriculography showed diffuse hypokinesis. Right-heart catheterization revealed reduced cardiac output (cardiac index of 2.10 L/min/m2). Therefore, we presumed that the patient had dilated cardiomyopathy complicated with AF. 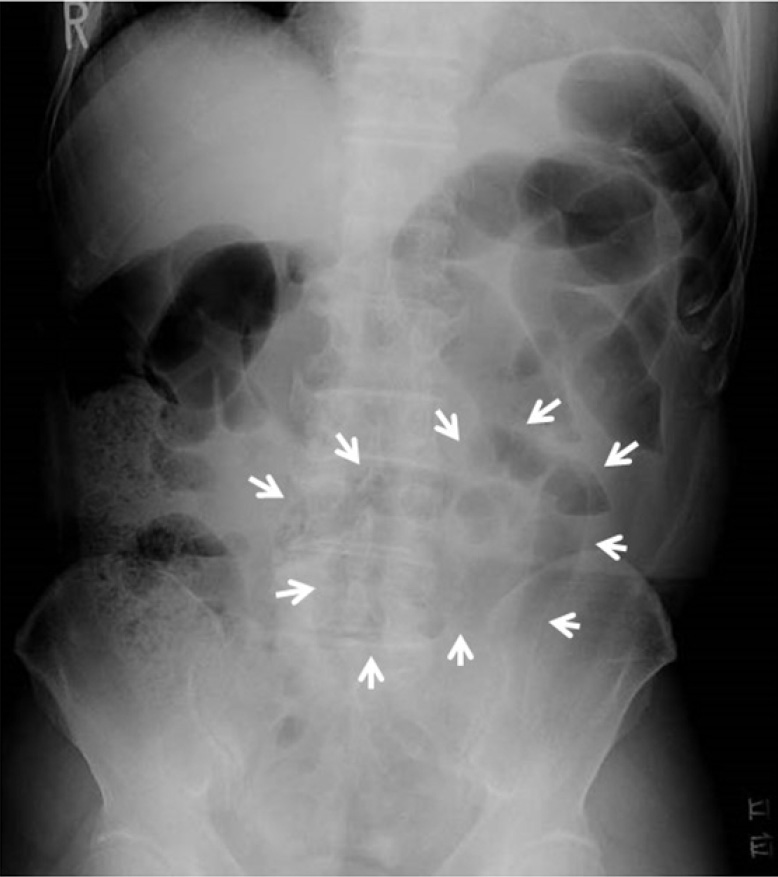 Figure 1 Plain abdominal radiography in the supine position showing a sentinel loop (arrows). The air-filled distended small bowel can be seen in the left lower abdomen. 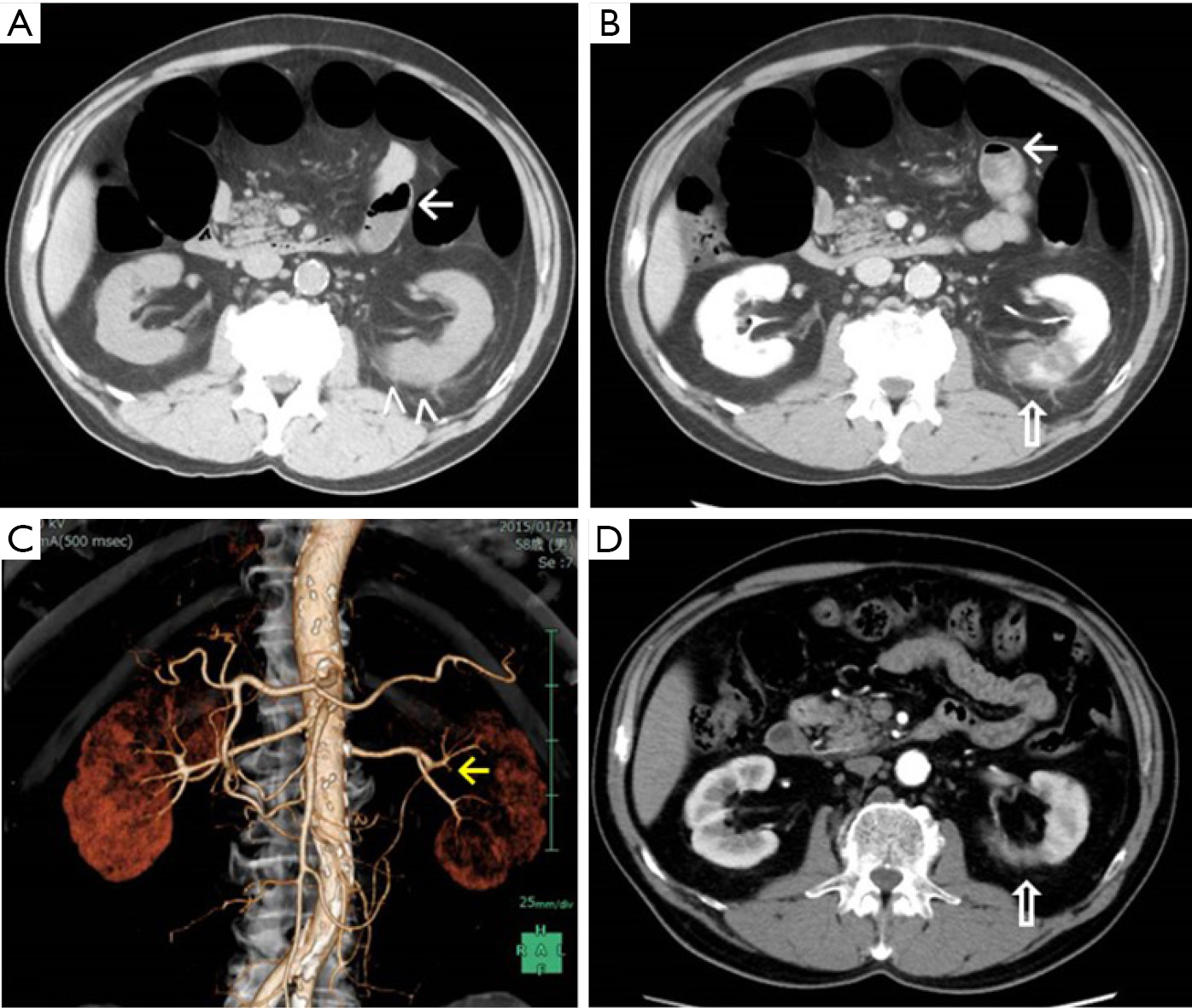 Based on these findings, we considered that the patient developed acute RI caused by embolism from the heart, and local inflammation due to RI induced paralytic ileus, presenting with a sentinel loop. The possibility of acute mesenteric arterial occlusion was excluded, because the patient did not have typical symptoms of mesenteric ischemia such as nausea, vomiting, bowel emptying or severe abdominal pain out of proportion to the physical examination. Moreover, based on imaging studies by CT angiography, the occlusion within the mesenteric arteries was not demonstrated. The patient was managed conservatively with anticoagulant therapy (intravenous heparin 10,000 units/day followed by a non-vitamin K antagonist oral anticoagulant, apixaban 10 mg/day) and without antibiotic therapy (Figure 3). Two days after admission, he reported post-obstructive diarrhea, and both his symptoms and radiographic signs of ileus were resolved. No systemic embolization occurred during the year following the initiation of therapy, but mild renal impairment remained, as evidenced by a serum creatinine level of 1.23 mg/dL and creatinine clearance of 59.9 mL/min.

Figure 3 Clinical course of the patient.

Acute RI is rarely reported in the medical literature. The two major causes of RI are thromboemboli, which originate from a thrombus in the heart or aorta, and in situ thrombosis, which primarily occurs as a complication of progressive atherosclerosis in elderly patients (2,5). AF is an important risk factor for peripheral arterial thromboembolism, and is the most common etiology of RI (5). In the present case, RI likely occurred due to an embolism from a thrombus that formed in the heart. Previous reports have shown that the incidence of renal thromboembolism was 2% in a series of almost 30,000 patients with AF (6). Hence, RI is not extremely rare in patients with AF. However, the clinical diagnosis of acute RI may be missed because most patients present with clinical symptoms including abdominal and/or flank pain that mimic other, more common conditions such as nephrolithiasis and pyelonephritis. In this case, persisting flank and lower back pain, hematuria, and elevated serum levels of LDH suggested the presence of acute RI. Abdominal CE-CT confirmed the diagnosis, and CT angiography proved the presence of intrarenal arterial occlusion. Mesenteric artery occlusion was excluded by clinical symptoms, imaging studies and the outcome after treatment.

Additionally, this patient had findings consistent with paralytic ileus as indicated by the presence of a sentinel loop, which refers local paralysis and the accumulation of gas in the bowel loop. Paralytic ileus is a condition in which there is loss of peristalsis in the bowel in the absence of any mechanical obstruction. It is commonly seen in patients as a result of intra-abdominal processes such as recent gastrointestinal or abdominal surgery; severe medical illnesses including serious infections; respiratory failure requiring intubation; uremia; diabetic ketoacidosis; electrolyte abnormalities (hypokalemia, hypercalcemia, hypomagnesemia, hypophosphatemia); or use of medications that affect intestinal motility (opioids, anticholinergics, phenothiazines) (7,8). However, in this case, the clinical features and laboratory findings suggested that these conditions and diseases were absent. It is known that the sentinel loop sign occurs in acute pancreatitis, acute cholecystitis, and acute appendicitis, signaling nearby intestinal inflammation and aiding in the localization of the source of inflammation. We presume that the inflammatory exudate in acute RI that extends into the retroperitoneal space and spreads to the small bowel gives rise to this sign (4). To the best of our knowledge, no previous English literature has reported a sentinel loop caused by acute RI. Early identification and treatment of RI is important in order to recover the function of the affected kidney and to prevent repeated thromboembolic events. It is thus imperative to remember that paralytic ileus can be caused by prior intestinal inflammation in patients with acute RI.

The optimal treatment for RI is uncertain; however, several reports have shown the efficacy of certain approaches including anticoagulation, percutaneous endovascular therapy and open surgery. Our patient was managed for renal embolism with anticoagulant therapy, and the ileus subsided five days after symptom onset with conservative management. The prognosis following RI is not well defined. In a review of cases of RI in patients with AF, emboli to other organs, such as the brain and intestines, caused early death. The mortality rate was 11% in the first month after diagnosis, and repeated thromboembolic events occurred in 13% of cases at a mean follow-up period of three years (9). Since the risk for AF increases with age and the prevalence of AF in the general population is increasing (5,10), it is speculated that the incidence of RI has been simultaneously increasing in recent years.

In summary, we report the case of a patient with acute RI who presented with a sentinel loop. We should keep in mind that a sentinel loop can be seen in acute RI as well as in the inflammation of other intra-abdominal organs. Acute RI may not be as rare as previously assumed, and early diagnosis of acute RI, along with early initiation of therapy, is required for the best prognosis.

Informed Consent: Written informed consent was obtained from the patient for publication of this manuscript and any accompanying images.